There are few relatively ordinary things that make me happier than a good meal. By "good," I generally mean tasty, not necessarily healthful. Food often is an event for me, and when an opportunity big and salty with gravy presents itself unexpectedly, that's a good moment.
So, this day had redemptive powers. My buddies Chris and Diego called to invite me out to eat. Of course I went and we found ourselves in a part of town I don't often visit. 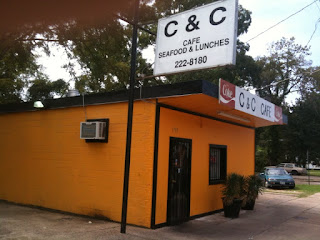 I shall return! Give it up for C&C Cafe, where the gravy flows freely and the entire meal is served fresh off the stove.
It was interesting to experience. The three of us had been chattering on about a whole lot of not very much until our food arrived. Then, for what must have been a full five minutes, nobody spoke. We were too busy keeping our heads down.
One of my chief complaints about your run-of-the-mill mom and pop restaurants involves rice. Usually, it's served in some kind of clump and there's not enough of it. At C&C, the rice is long grain, loose enough to identify the grains and it's swimming in nearly perfect brown gravy. The smothered pork chops or chicken livers or chicken fried steak is really the side dish, as far as I'm concerned.
The bad news is, a bellyfull of rice & gravy expands on you about an hour later and you really need a nap. That's okay. I'll take it. Not the nap, the expanding rice.
The portions are large and the price is right. I plan to work my way down the menu.