(Bossier City, LA) - I made my wife get up off the sofa and go hang around the side of a road on a sunny Sunday afternoon and she thanked me for it. In fact, her eyes were dancing with light as she expressed her gratitude, saying "that was so cool!"
What was it? The space shuttle Discovery, riding piggyback on a 747, flew right over our heads. 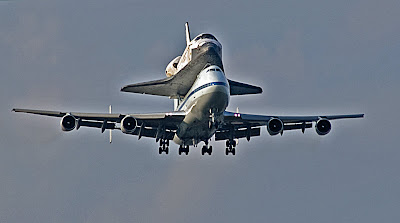 The shuttle's most recent mission ended with a landing in California. It is based in Florida, so it had to get back. 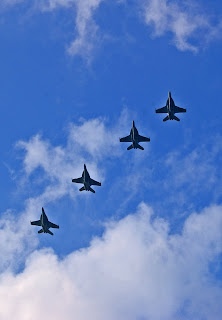 The local Air Force base is just about halfway in between, so it's a logical place for the transport plane to refuel and for the shuttle to spend the night. The arrival was quite a show, complete with fighter escorts. They noisily circled the sky, their pilots no doubt keenly alert for any potential threats. From the ground just outside the perimeter of the base, it was quite a thrill. 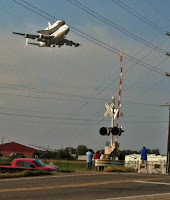 As word of the shuttle's imminent arrival spread, people found their way to roadsides and back yards, hoping for a glimpse. It may be the last time we see something like this because the shuttle fleet is soon to be retired.
Strangers became collaborators, as people used their BlackBerries, iPhones and other devices to scan for the latest information about exactly when the shuttle would fly over. 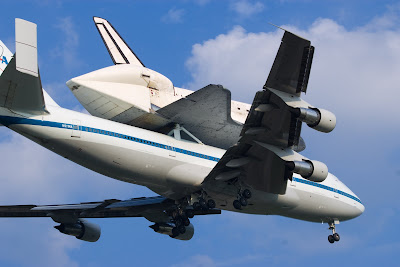 The information we assembled proved to be reliable, as indicated by these photos. I debated with myself for about an hour about where to set up because I knew this was a one-shot opportunity. 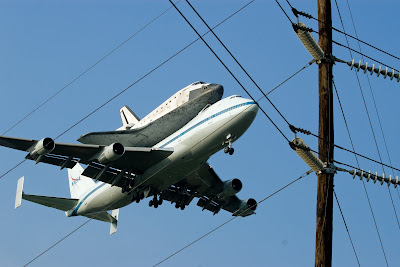 My biggest concern about the location I ultimately chose was the proximity of powerlines. They were an issue, but it turned out there was enough open sky to get the job done.
Living in Louisiana, we love our lagniappe, and we got some on this occasion. The 747's pilot elected not to land on his first approach. 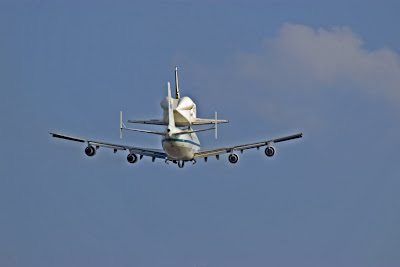 So he brought her around one more time! It wasn't a one-shot deal after all. On the second pass, the 747 and its extraterrestrial passenger landed safely. Suddenly, all along the roadside, things were momentarily quiet. Then, the people who were sufficiently motivated to roll out and witness the spectacle were basking in the thrill of it all. I admit it was, to borrow a phrase, "so cool!" 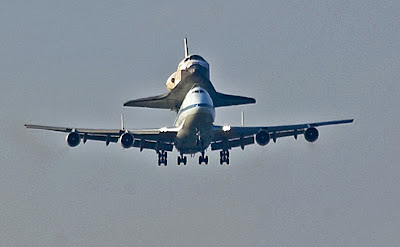 Thanks so much, Daddy D, for taking us along for the "ride" to see the shuttle!!!

I saw it also, but quite by accident...didn't know it was coming. I was driving down HY 80 going to Albertson's from Minden being distracted by the show of the escort jets, when all of a sudden the shuttle was right in front of me. Of course, I fumbled with my phone trying to get a picture, but missed. As I got out of the car at Albertson's, I saw it again! Didn't know it had circled around and come in again! So very cool to see!