Many Hats, Many Shirts

Life as an independent broadcast professional can be colorful and confusing. Incredibly, my mug showed up on TV on two stations on the same day in divergent contexts. If against all odds you might have seen parts of both broadcasts and you had the television on "mute," you still could have easily discerned the difference. In the early morning, I was in a suit making my contribution to "Wonderful Day Ark-La-Tex," discussing common illnesses among house pets. 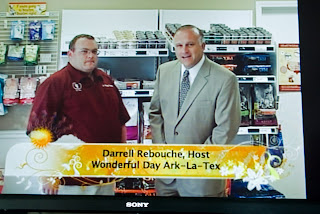 In the evening, I found myself on the sidelines of a football game donned in a sporty white polo shirt with the TV network's logo on the chest. My mission was to report on interesting sidebars during the course of the game and host the halftime festivities. 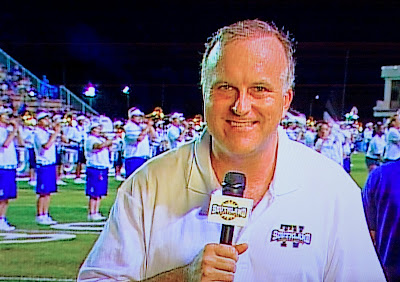 All of this took place less than 24 hours after juggling the wardrobe between my full-time job and another freelance broadcast assignment. 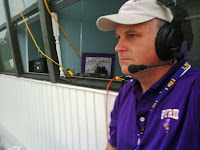 With a late Friday afternoon meeting in a sport coat and tie, I had to hustle home and change into "sponsored" clothing for a radio broadcast of a football game in central Louisiana. Think about that for a second. I have a sponsored garment for a radio broadcast. It may not make sense on its face, but there's a free shirt in the mix, so I'll take it.
As the juggling of these assignments required a certain amount of sartorial dexterity, it also meant spending some quality time with my old friend Interstate 49. Thank God for satellite radio. My SUV is my best friend these days. It has everything I need: leather seats, Bose speakers, Siruis/XM, an iPod dock, air conditioning that blows cold and plenty of room for several changes of clothes.

Naturally, given this brief spike in broadcasting activity, I checked the DVR's. I like the tan suit best. It makes me look skinny. Who knew neutral tones with window pane stitching had a slimming effect? Now, if I can just do something about that old-looking face......