Those Crazy Kids Blocking the Street

The neighbors have no doubt noticed the number of cars parked in front of our house late into the evening. If they've thought anything about it, they may assume there's some kind of party going on.

There are teenagers around, frequently in significant numbers, so this might be a reasonable conclusion.
Yes, the dining room is packed with 17 and 18-year-olds, but as best as we can observe there are no shenanigans involved. 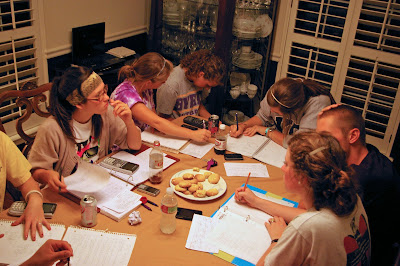 Remarkably, this is a study group. These high school seniors are serious about their grade point averages, and an advanced math class has their attention.

Pencils are being chewed, calcualtors are being frenetically punched, graphs are being drawn and foreign-sounding phrases like "negative reciprocal" are being bandied about.
As the night wears on, there are expressions of dread as they lament the apparent necessity to stay up late working on this and other academic pursuits. Remarkably, our daughter's year-older boyfriend is hanging in there. An engineering student at a nearby university, he enjoys a reputation as someone well accomplished in matters of mathmatics. He seems to be acting as a tutor to those assembled, and who can argue with that? 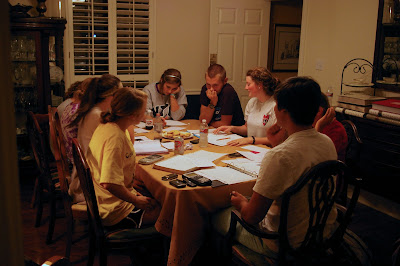 It's all very encouraging. It's almost as if they they are beginning to realize that in less than a year as they start college, this kind of thing presumably will be a way of life. It's kind of noisy in here, but we're not complaining. Not long from now, the house will be empty and it just might be eerily quiet around here.
So, as far as I'm concerned, they should go ahead a plan a party for this weekend and really give the neighbors something to talk about.

Congratulations... You blog is very good!!!