Someone who saw me on consecutive nights this week described me as "a man of many talents." While that's flattering, it's also a little off the mark. It might be more accurate to think of me as a guy who works cheap and can't say no.
All false modesty aside, it is nice that people ask me to do things for them. So, I show up "out in the public" a little. I've been doing public address at a local football stadium for three seasons. 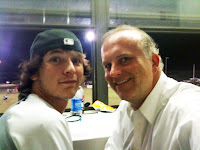 I've worked side-by-side with a young upstart who happens to be the son of a long-time friend. He works the scoreboard and during down times plays music. My public address technique is some homogenization of John Facenda, Michael Buffer and Foghorn Leghorn, I think. They keep asking me back, though, so not everyone thinks it's preposterous. 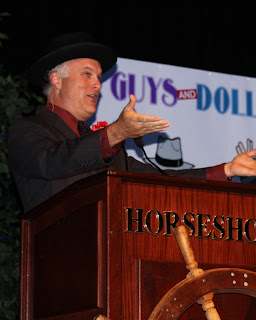 The next night I found myself on stage and in the spotlight as the host of a fundraiser for the local university. The theme of the show was based on the legendary musical "Guys and Dolls." So, there I stood in a costume fedora and a pinstripe suit, affecting some kind of accent and trying (unsuccessfully, I suspect) not to embarrass myself. 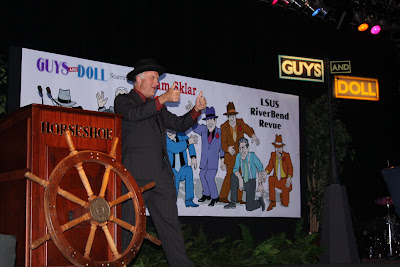 I got conflicting direction. A couple of the event's organizers wanted the host to present himself as a gangster. Others wanted less goombah, more gentleman gambler. I just tried to find a middle ground somewhere between Marlon Brando, James Caan and James Gandolifini.
The experience was made all the more noteworthy by the fact that the man who signs my paycheck was there, at a table with three other people who could fire me on the spot with no questions asked. 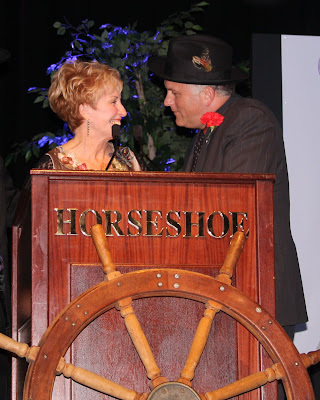 Gosh, I hope they were entertained. I wasn't exactly comfortable referring to all the women in the room as "dolls," but that's what my marching orders were.
For now, I'm just lying low for a couple of evenings in the quiet comfort of the family home. I'm planning to sit around in shorts and a tee shirt and just be myself for a while.