Unexpectedly, we are caring for babies at our house. I stumbled across a pest control crew doing what they do, but they weren't dealing with rats or roaches. They were relocating some baby raccons. 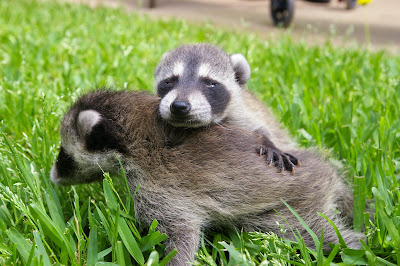 By "relocating," I mean they were going to take them somewhere and "control" the "pests." By "control," I mean something slightly more permanent. It's not a coincidence that another term to describe a pest control crew is "exterminators."

I just couldn't live with the idea that these fine professionals would lop off their little heads or something, so I made a snap decision. I had no idea what I would do with baby raccoons. I just knew I had to save their little lives. So, I took them home.
The family sprang into action, running off to the pet store to get tiny bottles and kitten food. Then, I went to the Facebook family for advice, posting a status update which said "I just rescued baby raccoons from certain death. Now what?" The reponse was immediate. There were many productive ideas. 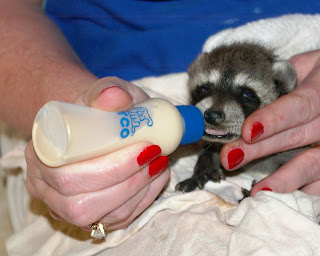 Here's what seems to be working out: a local petting zoo said they will take them, raise them and then release them. In fact, they are working with two raccoon babies now, and they said "What's two more?"
So, another day or so of bottle feeding and then the little masked refugees are off to the care of professionals. Here's hoping they keep their heads.