All Dressed Up With Someplace to Go 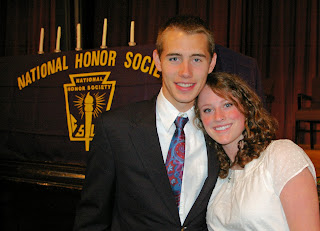 Happy Couple II found a reason to get kind of dressed up just two days after after skipping town on prom night. There was no long dress or tux, but there was a tie involved. They both were called to the stage during an honors assembly at their school. They they were, well-scrubbed and academic, receiving applause from their fellow students. It was a proud parental moment, to be sure.
----------------------------------------------
There is a protest on the floor from the original Happy Couple. They are not pleased with their younger counterparts' designation as HCII. Apparently, my son and his longtime love interest want to claim some kind of intellectual property or copyright infringement. I've tried to come up with a more original nickname for my daughter and her boyfriend. 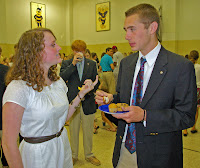 Looking at these two, I suggested 'Milk and Honey," but I'm not sure they liked it so much. It seems to fit. They're the clean-cut, church-going kids. He was a finalist for student of the year...you know, wholesome like milk. She's sweet like honey. Somehow, I don't think it will stick.
If the older pair wants to have anything to say about all this, they're going to have to come around more. At 19, they're asserting independence, which is a healthy thing but provides them no say whatsoever in the assignment of nicknames. Appeals will be addressed only in person.

Well, excuse me!
But you have to admit that you HAVE been out of town a lot. I'm still around!!


Just so you know, my feelings are a little hurt.

Enjoyed your comments on HC I & II. You seem to have raised some great kids.