It's Day Two of the Raccoon Rescue and not suprisingly our little ringtail visitors have names. 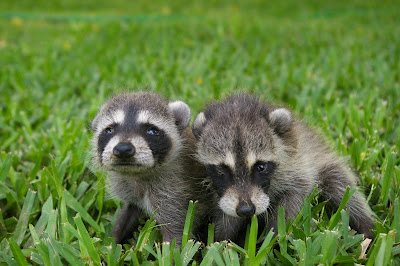 Happy Couple II and some visitors spent quality time with the furry refugees, doing the late-night bottle feeding. The group engaged in a spirited debate about whether to give them names and if so what names to give them. Somehow, they settled on Cory and Topanga. I couldn't tell you which one is which.
Nocturnal by nature, Cory and Topanga apparently had an active night in the kitty carrier which is their temporary home.

In the morning light, we let them wallow around in the grass. As best they could with their developing legs, they tried to follow us around.

One is obviously sronger than the other. Interestingly, the "weaker" of the pair is the better eater.
It's not every day you see baby raccoons, so they're all the rage for now. The cat got all worked up about it, as you might imagine. The dog showed only a passing interest. A couple of sniffs, followed by a conclusion that she would not be allowed to eat them and they couldn't play with her, she just walked away.
The raccoons will get cuter by the day. I know at some point they must go away. The longer they stick around, the harder it will be to make that happen.

They are adorable.... About 2 years ago, we raised a male racoon and it was fun watching him learn how to do all the things that racoons do. We let him go after teaching him how to take care of himself. We got him shortly after his birth. His mother had given birth on a train and left to get food for him and his siblings and before she could get back to them, the train had left. "Bandit" was the only survivor and it was very special to us to know that we were able to keep him alive and set him free. We also rehabilitated a squirrel. We struggled with wanting to keep Bandit as our pet, but we knew that the animal instinct in him would eventually kick in and it was in his and our best interest to let him go. We do think of him often though. You are doing a good job with these guys. Keep up the good work!!

Core and Topanga? Really? I guess it's better than "Bandit".

Rehabilitation doesn't really work at our house. Everything I've found in the backyard has been killed and left as an offering by our 4 month old Shih-tzu.