Coon Daddy and the Dog

It sounds like a 70's sitcom doesn't it? "Tonight, after an all new episode of Three's Company, a madcap comedy about those crazy Cajuns: Coon Daddy and the Dog!"
Instead it's just me, rescuer of baby raccoons, amusing myself on a soggy Sunday by letting my golden retriever check out the kids. 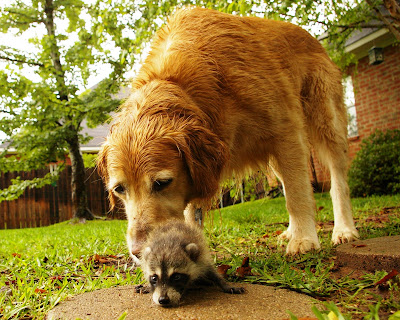 The internet communities in which I dwell are abuzz about all of this. Some people have suggested these guys would be great in a stew. This led me to ask how big they have to get for us to wind up with stew and a couple of hats. Many more have warned us of the inherent dangers of hanging onto wild animals. The word "rabies" has been used a lot.
There's something about them, though. One of my favorite characters in modern literature, Detective Dave Robicheaux, has a pet raccoon. 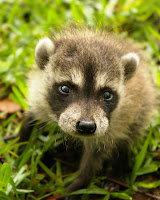 I know we have to let them go. The working plan is to take them to a petting zoo north of town. The folks there have agreed to raise the little guys and set them free. Right now, they're so cute and a source of such fascination that we simply haven't taken them yet.
Speaking of fascination, the dog is clearly showing a little more interest than she did at first. I'm convinced she's thinking something along the lines of "stew," too. 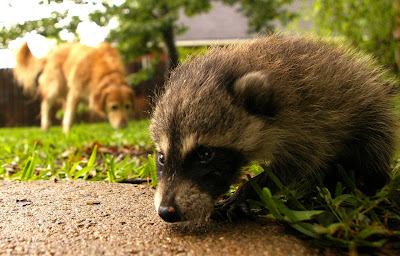 But so far, she has resisted the canine urge to devour our vistors.
I'm not going to advocate any fate which has the potential to result in the little guys' imminent demise. I didn't save them to eat them or wear them.
They are getting stronger every day, and this includes their claws and teeth. My wife has been dutifully caring for them, but multiple bottle feedings daily is getting tiresome. I suspect once the work week wears on for a couple of days, it will be time to say so long. 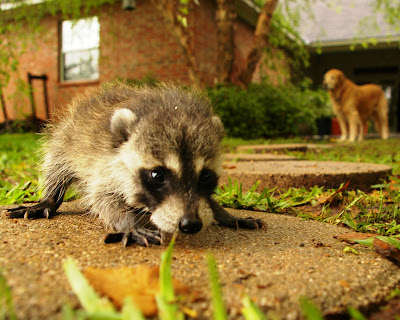 But you never know how these things go. The raccoon babies might be a hit. Coon Daddy and the Dog could get picked up for a 13-episode arc. 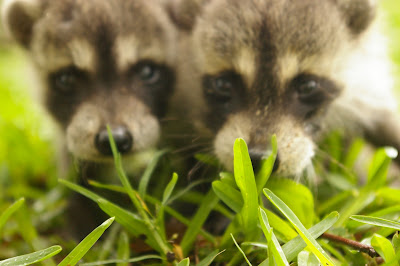