Who's That Lady in the Warmup Suit? 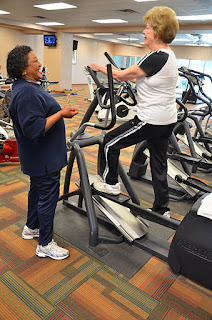 I bumped into my sweet mother-in-law the other day and she was sweating. Don’t feel sorry for her, though; she was doing it intentionally. The woman is a beast. She’s 74 years old and goes to the gym three or four times a week. She does the elliptical contraption, walks briskly on the treadmill, does a little weight training for core strength and then dutifully works on her balance.
There’s a lady who works at the gym who watches mother-in-law in wide-eyed wonder. We were talking about it, and when I said she was 74, the gym lady audibly gasped. She said, “I had no idea. She attacks that elliptical like someone half her age.”

This isn’t anything new, but before I talked with her about it this week I hadn’t given my mother-in-law’s workout habits much thought. She said she started routine exercising in her late forties in hopes of “warding off horrible arthritis mother had.” I don’t know if it worked, but it certainly didn’t hurt. There’s no sign of arthritis, by the way. 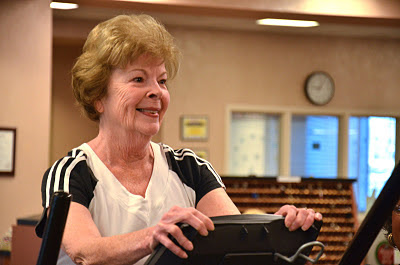 She joined a fitness center for the first time in 1989 and has been a devoted gym rat ever since. She admits that her motivation has changed over the last quarter century. She said fear of arthritis coupled with a desire to lose weight got her started. Now, she admits “I get a sense of achievement. I feel mentally and emotionally great” because of her consistent physical activity. I asked her how she thought she might be different if she hadn’t been working out all this time. She said “I don’t know. I’d probably be heavier and sluggish.” Probably so; I mean, heavy and sluggish? That hits pretty close to home!

She says she doesn’t really push herself to do more, that she’s happy to be able to do as much as she could could five years ago. 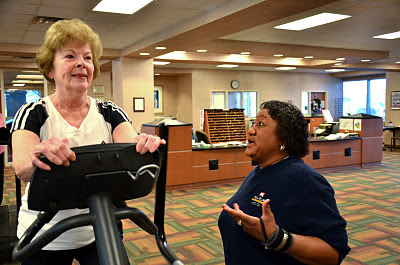 A couple of months ago, we took her to an LSU game and one of our traveling companions expressed concern about the amount of walking necessary to get from our car and hotel to the stadium. He was worried she wouldn’t be able to make it. At the time, I told him he didn’t have to worry about her; he should be more concerned about himself (he’s kind of heavy and sluggish like me). Now, having watched her work out, I think about it and laugh.

I just hope five years from now, I’ll be able to keep up with HER.

The moment you cannot feel your lower abs working or you feel other muscles are doing the exercise for you, stop. Take your time. Rushing through a lower abdominal exercise is never a good idea. It doesn't matter how quickly you can get the reps done. Its more important to be controlled as you do them. When you do these abdominal exercises quickly, youe decreasing their effectiveness.

What an inspiring lady! I am about a third her age and I have to drag myself to the gym each day. I definitely don't like it, and I definitely haven't gotten to the point yet where I feel a sense of accomplishment. Though once it's over and I've cooled off, I do feel pretty good about myself. But really, if your mother-in-law can go so consistently, so can I. I mean, I even have a fantastic Jordan warm up suit that is great to wear.