Aloha and Peace Be With You

(Lahaina, HI)- “Oke aloha o ka Haku e mau ana me ‘ouku.”
The proper response is “And also with you.”

Holy Innocents Church provided a worship experience which was exceedingly familiar but in many ways completely different from any other I have had. 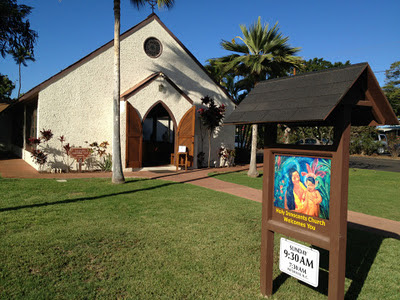 Praying in Hawaii's native tongue in concert with English was moving, and the setting was simultaneously soothing and uplifting. We congregated in open air with a gentle breeze lifting the scent of nearby flowering shrubs into the worship space. 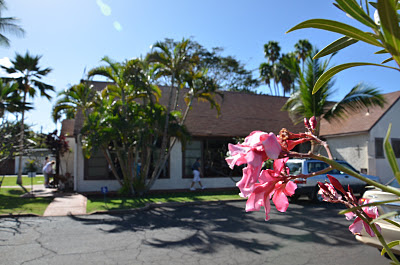 There was an organist playing traditional hymns, but no choir. When he played the intro to the opening song, “I Danced in the Morning,” I tentatively sang the first few words; but the little church, which was about 2/3rds full, just exploded with sound. The people were singing, singing well, in full voice. I remember thinking “Wow. This congregation is really devoted to its music ministry. Who needs a choir?” The commitment to song continued throughout the service. It actually brought tears to my eyes. 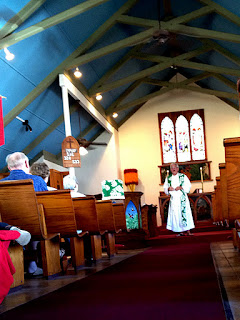 Then at the offertory, the priest said “Normally, I would ask our visitors to stand and tell us we’re they’re from, but there are so many of you I think it would take too long.” He asked for a show of hands from people who hailed from the west coast, the Midwest, the South, and the east coast. I watched people raise their hands and did the math. There were only about ten people in the church who were members. I overheard one of them say, “Communion’s going to take a while.” It did. In fact, the organist added an unplanned hymn to fill time, “Let Us Break Bread Together.” The congregation took it on, without music or hymnals, in full voice. It was just so beautiful.
Another thing I noticed was father Bill Abinger’s footwear. Sandals, flip-flops maybe. Later, he would tell me “don’t call them flip-flops, for Heaven’s sake. They’re ‘slippahs.’” Okay. He takes his “slippahs” off when he’s at the altar to honor the Hawaiian tradition of removing your shoes in your home. 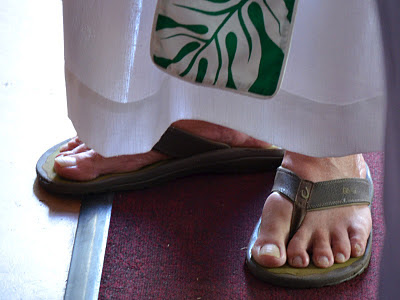 I wasn’t prepared to pray for King Kamehameah IV or Mother Maryanne of Moloka’I, either, in the spot where usually (depending on where you are) you mention Pope Benedict or the Archbishop of Canterbury. God bless the King (and Queen Emma, too).
Madonna and Child have a different look, too. The image was painted in 1940 by New York artist Delos Blackmar. A Lahaina mother and her infant daughter posed for the piece. 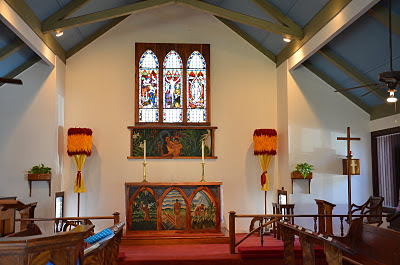 Panels on the altar portray the Hawaiian staffs of life and symbolize the body and blood of Christ. 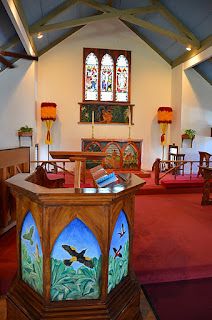 Panels on the pulpit depict rare or extinct native birds, left to right: ‘apapane, ‘ou‘ou, ‘i‘iwi, mamo, and ‘o‘o. They symbolize God's word winging forth from the Christian pulpit.
The stained glass is much more traditional. The triptych portrays the baptism, crucifixion and resurrection of Jesus Christ.
I was tingling as I realized that all of these people from disparate points on the mainland made a decision to come together in this lovely space to follow the command E ho ‘omaka’I aku kakou I kakou Haku Akua “Let us give thanks to the Lord Our God.” I’m so glad I went. And so, on Sunday from Maui, I’ll say it one more time: Oke aloha o ka Haku e mau ana me ‘ouku. May The Lord be with you.