As I grew up, I was fascinated with radio and TV. For 27 years, I earned a paycheck (saying “made a living" could be considered a gross overstatement) pursuing my fascination. As my children reach adulthood, I have been breathing easy knowing they escaped the sinkhole of local broadcast media. (Just kidding, mostly). So imagine my alarm when my 20-year-old son announced the debut of his weekly radio show, The Transpersonal Growth Hour. 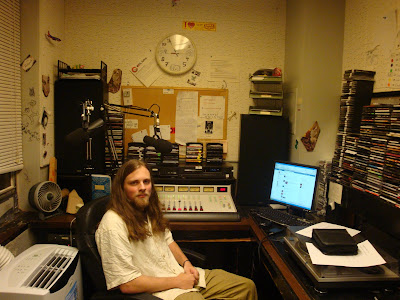 There he is, at the board in the cutting-edge studios of KSCL radio on the Centenary College campus. Don’t ask me about the music he’s sharing with his vast listenership because I’m not familiar with it. I tuned in for the whole presentation, though, and the songs he played were mostly pleasant.
He said to his mother, “Now I understand why Dad loves this so much.” He did not say anything to me because he knows I would tell him there’s more downside to pursuing this than potential benefit. He wouldn’t listen to me, anyway. I mean, why would he start now? 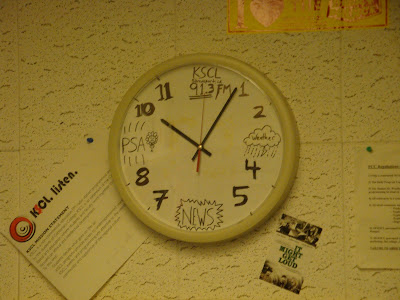 Honestly, he’s doing this just for kicks. College radio’s old-school freedom allows guys like him to express themselves and that’s a beautiful thing. His presentation needs some polish. There was a disturbing amount of “dead air” during his time. His transitions were awkward, at one point including dumping out of a song right in the middle of it.
His voice is pleasant, though, and his delivery is conversational. So, there’s real potential there. He just needs to tighten up his board operations.
It’s not like he’s new to all this. As this photo from October of 1999 clearly proves, he’s already a broadcast veteran. 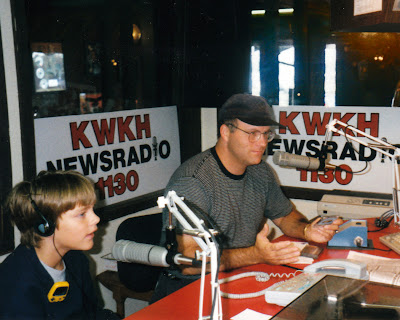 I’m still holding out hope that this remains an avocation, or merely a pastime. Still, I have to admit it was fun to hear him on the radio. I guess his old man is finally earning cool points. It’s taken me a long time to get into a position to redeem them.

Get Out, Christopher!!!!! I kid! College Radio is absolutely the most joy one can have in broadcasting, IMO