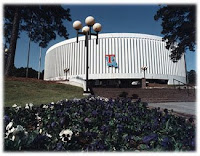 I spent a quarter century going as fast as I could back and forth from the Thomas Assembly Center in Ruston covering Louisiana Tech basketball. The women's team was nationally prominent and the men's team featured the likes of future NBA standouts Karl Malone, P.J. Brown and Paul Millsap. Ruston is 70 miles east of Shreveport, so to get highlights on the 10pm news, one typically drives a couple of hours to see about fifteen minutes of actual college basketball.
In my narrow view, this was often underappreciated by certain folks on campus, but I enjoyed doing it nonetheless. I've always thought it was vital to the legitimacy of local sports media as well as the athletic program at Tech for those games to be covered on a regular basis.
All of that philosophical blather is moot now since I no longer have a stake in the local media game, but I still feel strongly about it. I remember getting into a huge war of words with a news director and a general manager who were looking for ways to trim expenses. I was told in an unmistakably condescending tone, "You're going to have to cut out your little trips to Ruston." I stood my ground and continued to cover La. Tech's sports quite consistently. I wound up doing it myself, rather than assigning someone. This meant leaving after the 6:00pm news, driving an hour for a game that starts at 7:00pm, getting the end of the first half and turning right around to drive back. I had a major conflict with a campus cop one time when I arrived at a game with two minutes left in the first half and he didn't want me to park and run in. The idea that I would be leaving at halftime meant nothing to him. I have to admit my feelings were profoundly hurt that evening.
Against that backdrop, we frame this photo: 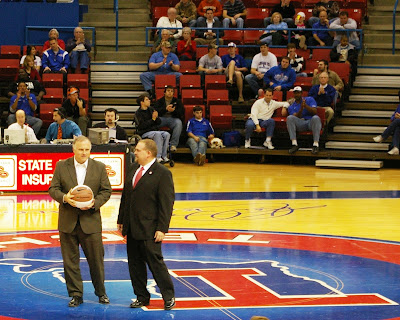 This has nothing whatsoever to do with me personally. I was representing an organization at the game. But, there I was at center court with Karl Malone looking on from the front row. Tech presented the organization with a basketball autographed by the team. The crowd applauded politely, as the warm folks of Ruston are inclined to do. I enjoyed a self-indulgent moment, thinking of things like forgiveness.
I realized again how much fun it can be to take in a game at your own pace, without a deadline hammering you. I might go back and sit in the stands one night. Isn't that what most people do?