(Dallas) - The frigid weather of the past week is a memory now and this January afternoon in north Texas was spectacular. With several hours to pass between our hockey-basketball double dip, my buddy Roy and I decided to walk through Dallas' trendy West End.
Did I say walk? Yes! we had a fantastic parking space at the arena, so why give it up?
If you're in this part of Dallas with some time to spend, there are a couple of things you can do: visit a restaurant or a club, or go see where JFK was shot. Well, we did both.
At Roy's insistence, I had a photo taken at the legendary grassy knoll and it felt perfectly silly. 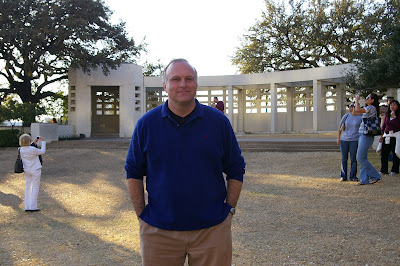 I was surprised at the number of people who were there, though. Most had cameras or video cameras. Forty-five years after the fact, the Kennedy assassination endures as one of the most compelling periods in American history.
So, the grassy knoll it is.
We are here for basketball, though. We walked right past the Dallas Mavericks' larger-than-life owner, Mark Cuban. That was a celebrity sighting for me. He's a rich guy and a famous guy. So, I'm pretty sure he qualifies as a celebrity.
I did not ask to pose with him for a photo. He's an owner, after all...not a mascot.