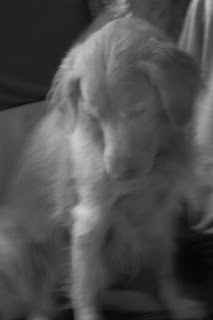 The look you see on our dog's face means "what is that furry thing that my family has brought into the house?" The answer is a stray cat, which I am forbidden to show you for reasons which are diabolically logical.
A few nights ago, I was in the back yard doing grill duty when there was a commotion in the shrubbery. I was thinking "bunny," but much to my surprise a kitten came slinking onto the patio. The little guy was skinny, starving and thirsty. I know this because I put some dog food out and it pounced. I gave it some water and it plunged face-first into the bowl. I watched it for a while thinking it would go home. It did not.
After a while, the little cat drew something of a crowd. Watching it eat became a spectator sport. It walked around and greeted everyone, so I became convinced that it is someone's cat and it has just wandered away from home. I was sure it would leave the same way it came and we would be done with it. That has not happened.
It has been abnormally cold this week, and the other people in my house would not sit idly by and watch the cat stay outside in the freezing nighttime, even though it has obviously made it this far in life without us. So, they brought it inside. I have been saying several times a day, "Somewhere there's a little girl named Emily or something who is crying herself to sleep because her kitty is gone. She thinks it has frozen to death or has been eaten by a coyote. Put it out and let it go home."
Their position is they are keeping the cat safe and warm, and if it lives nearby then Emily will put up "lost cat" signs. I say "Emily is too little to make her own signs." The counter is, of course, that Emily's parents will make signs. So far, no signs. So, I say, "Let's make 'found cat' signs." They say no, that the people at LSU Health Sciences Center will see the signs, claim the cat is theirs and take it back to LSUHSC to do live experimentation. I am not making this up.
They have not been allowed to give this cat a name. After all, Emily is out there somewhere. I've been semi-twittering about this by mentioning the cat in my Facebook status, and today I got a friend request from someone down the street whose neighbor is missing a cat. Did the internet relieve Emily's emotional pain? No. The description of the cat offered by my newest Facebook friend isn't even close.
This is why I am not allowed to show you the cat. As the thinking goes, anyone who reads the blog could claim the cat by describing it from a photo posted here. This tells you everything you need to know about the intentions of the other people in this house. The little thing is skinny and it didn't have a collar. It has been said more than once that cats adopt families, so maybe we've been chosen.
If Emily doesn't surface soon, I have another mouth to feed, another vet bill to pay and more pet hair. The population of this house is supposed to be getting smaller as the kids get older. Instead, it seems to be going in the opposite direction.
The other people here are sick of my Emily speech, so now I just drop a random sigh and say, "poor Emily." My declarations are now falling on deaf ears.
Emily, wherever you are, break out the magic markers.

Thanks, Darrell, to you and your family. Coming from an animal person this does my heart good. Thanks for showing pitty on this cat and giving it food & shelter. You can tell a person's heart by how they treat animals. May God continue to bless you. If we can ever help you all with anything please give us a call. - Cindy & John Pennington