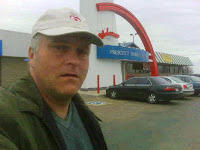 Somehow, I became confused and disoriented in Prescott, Arkansas. On the way home from a weekend in the minor mountains, we stopped at a travel plaza to fill up the car and grab some lunch. It was one of those places with three or four fast food franchises under one roof. The sandwich artist at the Subway counter was in full-blown ADD mode, keeping two or three conversations going at once. His boss had told him he had to step up his game, we were informed. His boss might have served customers better by asking the guy to bathe more often, but that's another story.
Already dizzied by the tempest behind the counter and his inability to focus exclusively on assembling my double-stack BMT, I went to fill my drink cup. That proved to be a challenge because the drink dispenser had not been filled with ice. So much for stepping up his game, right? A disheartened trickle of Five Dollar Footlongers wandered through the intellectual desert until we found ice over by Sonic.
Somewhere between eating my Doritos and buying a box of Whoppers for the rest of the trip, my wife and daughter disappeared into a vortex that from the outside appeared to be a ladies' room. It might as well have been the Bermuda Triangle because they were gone for an alarmingly long time. They were gone so long, in fact, that I forlornly loped to the vehicle, Whoppers in hand, figuring they would show up eventually. I made it to the driver's side door when I heard a familiar female voice beckoning, siren-like, from under an awning. Dancing on the wind came a request: "Can you come pick us up?" It's a long way from the Prescott Void to the parking lot, apparently.
I spotted them briefly, dreamlike faces in the distance, flushed in the cold and yearning for curbside service. Yet, like the apparitions they seemed determined to emulate, they simply vanished as I made my way across the vast paved wasteland. I pulled to the curb and they were nowhere to be seen. Frustrated and bewildered, I simply found my way into another parking spot and waited. Moments later they appeared, complaining of the cold but finally corporal again. They slipped into the car as if nothing unusual had occurred and we were on our way, the vagaries of Prescott becoming but a memory in the rearview mirror.
----------------
I had a massage while I was in the Resort with the ladies. My therapist was named Bea and she was perfectly nice. About midway through the process she asked "You don't relax very often, do you?" Maybe not. I guess I need more massages. It was maybe my third. I'm not really sure what usually happens, but I feel like I need to send Bea flowers or something.
---------------
We had a hot tub on the deck outside our condo. The air temperature was freezing cold and the hot tub was well, hot. So, the combination was soothing. Every time I get into a hot tub I think of buying one. Then, I wonder how many times a year I would actually use it and talk myself right out of it.
--------------
For the trip, I randomly selected the book "In an Instant" by Lee and Bob Woodruff. It's about the ABC World News Tonight co-anchor who was gravely injured by an improvised explosive device (IED) while covering a story in Iraq. It hit me as I sat there that I was reading the book on the 3rd anniversary of the incident. I'm glad he's okay.

Yeah, it's too bad not all Sandwich artists can be as good as I was. Subway misses me.

I absolutely adore my hot tub. During the winter time, I could be in there up to 5 or 6 times a week. It is amazing stuff. It is a great place to relax and think as well as have some deep convos with people.