The D's: Big and Daddy 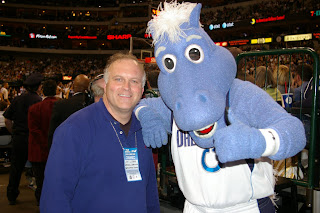 (Dallas) - It's kind of goofy. It's a little bit funny. It's a tradition now. It had to happen. The mascot photo. I've simply become shameless with this thing, even though essentially it amuses only me. You have to take life's little pleasures where you can get them.
The day trip to Dallas certainly was one of them. I saw my first NHL game and had a prime spot for the Mavericks' game against the Utah Jazz.

Both contests were closely contested and the home team won each time, so what more can you ask?
The Mavericks game was much more lively than the Stars'. That's no doubt because there were significantly more people there. Plus, my new buddy Mark Cuban places a premium on his Mavericks games being a total entertainment event. Like him or not, he puts on a show.

I kid around about Cuban because we passed in the hall and spoke briefly, but we actually do have a mutual friend. I thought about pausing for a moment to make the connection with him. But, all kidding aside, it was game day and that seemed inappropriate. Since it's unlikely we will ever be in a social setting together, I guess the hello in the hall with a affable nod will suffice.
I thank him for making NBA games interesting. This was my first Mavs' game since they moved from Reunion Arena, so that says something about how high they are on my list of sports priorities. Still, I'm glad I went and I appreciate my friend Roy for asking me along.