Reapplying for My Man Card

Having spent the previous weekend in the company of my two favorite women doing decidedly non-manly things, Super Bowl weekend presents itself as an opportunity to muscle my way back to the masculine coordinates on the gender axis.
Saturday was spent enjoying a local sports twin bill: college basketball in the afternoon and hockey at night.

Centenary College boasts an NCAA Division 1 athletic program, but hardly anyone notices. It is the smallest school in the NCAA's most prominent level of competition, which could be a badge of honor for the school and the community. It has sent two players, Robert Parish and Larry Robinson, to the NBA. Both earned league championship rings. Parish has five of them , in fact. Now, the city has essentially forgotten about the Gents although there was a nice crowd on hand for this game against Oral Roberts University. 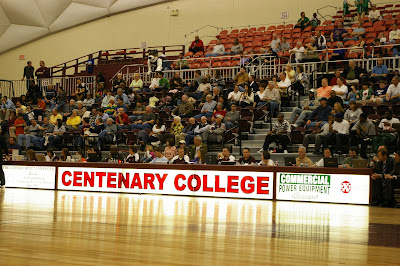 If Centenary's team could find a way to win consistently, it could capture the area's imagination. We really have something special here. People just need a reason to drive into the heart of the city and experience it.
Conversely, the minor league hockey team seems to be thriving. For more than a decade, the Mudbugs have attracted impressive crowds. On an ordinary Saturday night in January, traffic leading into the arena was so significant that police shut down nearby traffic lights to manage the flow themselves. It seemed like a special event, and I suppose an argument can be made that it was.

The team wins consistently and seems to always be in contention for its league championship. It gives people something to cheer about which is always a good thing. This was the first game I've attended this season. It was a pleasant way to spend an evening.
It did get me into a little pinch with my bride. There was a show downtown at the same time featuring Broadway stars singing memorable numbers from the Great White Way. She really wanted to go to that. We had dropped a chunk of change on the lodge and the spa the weekend before. The hockey game cost significantly less than the theater. Faced with the prospect of paying bills this weekend, that got her attention. Broadway can wait. Manhood sufficiently reasserted, I can strap in now for the last football game of the season.