As a lifelong sports fan, I make an annual attempt to watch NASCAR. I want to give the thing a chance by tuning in its biggest event, the Daytona 500. I saw more of it this year than I ever have before. But, I have to confess that once again I fell fast asleep somewhere in the middle of the telecast. We're talking sitting up, mouth open, drooling snoring sleep. The people in my house did things to try to keep me awake. My son, on his birthday, commandeered the HD and surround sound for an afternoon of Guitar Hero. While "Junior and them" were turning left on other TV's in the house, the living room was rockin'. I got up and played in a little Guitar Hero round robin with The Happy Couple and my daughter and that held my interest.

But once I returned to The Great American Race, Heaven help me I was sawing logs. This is despite the consumption of large amounts of Diet Coke and iced tea in a genuine effort to make it through the race while remaining conscious at all times.
I did see "Junior" wreck everybody, which as a non-NASCAR afficianado seemed to me to be a jackasss thing to do. Who knows? It might have been brilliant strategy, I couldn't tell you. I'm happy for the guy who won because he was so emotional about it. 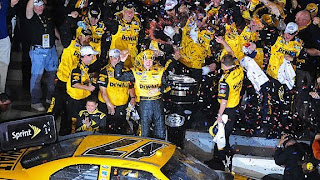 That's it for me and the stock car circuit for another year. See you in February when once again I will try to avoid a long winter's nap.