A Fish Out of Water

The 2009 Bassmasters Classic is behind us, and we are told it was a record setting week. More than 100,000 people saw some part of the event over three days, according to the event's organizers. To me that is just incredible. I read in the paper that on Saturday, the fire marshall would not let any more people into our arena, which seats 12,000 or so and holds even more with people on the floor. Although this kind of thing doesn't interest me at all, I had to see it to believe it. So, I used my familiarity with the arena to shoehorn my way in and I was just blown away. 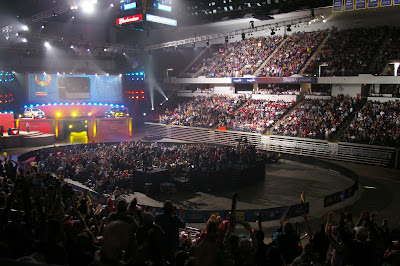 Aside from the sheer numbers, it was interesting to observe the demeanor of the attendees. They were thrilled to watch their angler heroes roll in and present their day's catch to be weighed. It was that simple: Ride in your boat as it is towed behind a pickup truck, put your fish on the scale, get the weight, get interviewed and get on your way. Next! Do it again...and the breathless thousands were having the time of their lives.

More power to them. I left after five fishermen and was happy to get home.
I had also read that more than 60,000 people went into our convention center on Saturday for a bass fishing expo. So, I had to see that, too. Having been there for about a half-hour, seeing the crowd and the cars and the vendors, I believe it.
Let me rephrase: I can accept that figure as true, but I still can't really believe it.
As long as I had decided to be out and about, I decided to immerse myself in full citizen participation. I went to an affternoon Mardi Gas parade. 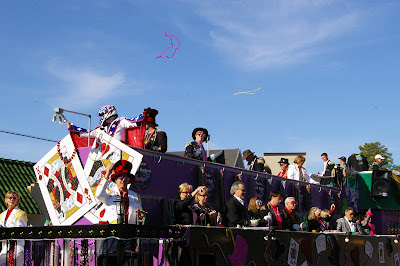 The atmosphere was lively and light-hearted. People were having a great time. So, it was a positive day and I was about to assuage my guilt about my own abject apathy.

I'm glad you were able to out to witness at least a small portion of the festivities. I have been in a frustrated state all weekend that I was not able to go, but I have been following it all very closely from every possible perspective thanks to this wonderful thing we call the World Wide Web. I am sure Shreveport represented very well, and I hope it is able to make a return trip in a few years. I have talked to many who attended, and everything has been very positive.

Hey, can I snag that picture? That's our float...Krewe des Ambassadeurs of Minden. I was on the other side, but that's a great picture of our float.

Sure. I think I have a couple of more. Send an e-mail to darebouche@aol.com and I'll send you what I have.