What's Wrong With This Picture?

So, the first lady of the Great State of Louisiana, Supriya Jindal, came to town today. She's the front person for the admirable "Shots for Tots" program, which promotes immunizations for the state's children. Why she appeared at a Wal-Mart escapes me, but okay.
Even in that peculiar setting, things could be okay...but some people just don't get it. The Wal-Mart braintrust set up a stage, a podium, a microphone and big speakers. They anticipated media coverage, and they got it. So, why...WHY would you set up the lovely, well educated, well spoken, highly respected first lady directly in front of the restrooms? 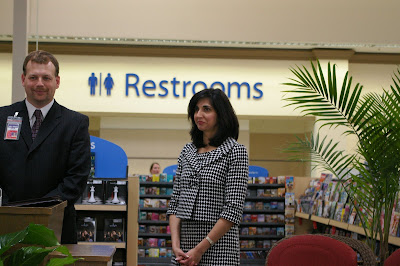 By the way, she was accompanied by the state secretary of health and Human Services. It was kind of a big thing. To prove I'm not making this up, here's a shot of the set-up, pre-arrival: 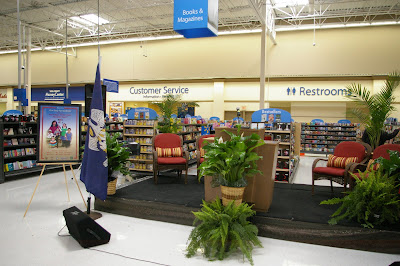 This is so shockingly stupid that I can barely wrap my head around it. Mrs. Jindal was gracious and probably didn't even notice. I mean, her back was to the bathroom sign.

Still, someone needs to receive a sternly worded memo or something. Better still, next time let's send the first lady of Louisiana, who might be the first lady of the United States someday, into a significantly more dignified setting.
For God's sake.

It's the "Sign O' the Times". Looks like some Wal-Mart P.R. Events Coordinator couldn't see the forest for the trees.

Wonder if this person will be demoted to "DGFL*"

(*Door Greeter for Life...actually may be a promotion after I think about it.)