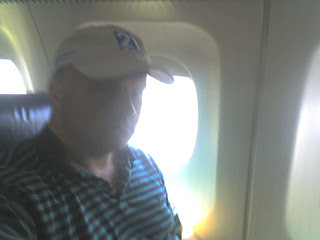 (Somewhere over America)- I know there are people who do this kind of thing routinely, but I'm not one of them. In the last 48 hours, I have been in Memphis, Philadelphia, Wilkes-Barre, Detroit, Houston and Shreveport. I've been on big planes, small planes and one prop job. It's fun in its own way, and also a little exhausting.
To make this all the more unusual for my family, my daughter is flying in exactly the opposite direction. While I was between Detroit and Houston, she jumped on a jet bound for Los Angeles. She will be gone for three weeks, ostensibly learning a little about college life while while staying in a dorm at UCLA. The film making classes and the water sports had nothing whatsoever with her decision to make the trip.
My wife is overly emotional, having watched her baby girl get on an airplane bound for the big city. She didn't set out to be a mom to a jet-setter teenager.
Things will be unsettled at the house for a while, it appears. As for me, I'll just be happy to get home to my own bathroom. Then, I'll just lie still for a few minutes and I should be okay.
For the record, I had six flights in three days on six different planes using three different airlines. Every flight departed right on time and landed when it was supposed to. Somebody's living right.