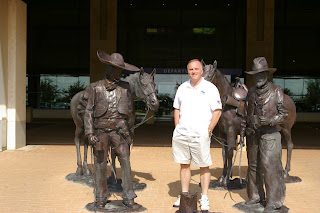 (Laredo, TX) - What was to be a two-night stay in this legendary border town has been significantly shortened by some kind of weather event. I was scheduled to fly through Houston last night, but we would not be allowed to land there because of heavy thuderstorms; so, what's the point? I stayed home, changed airlines and came through Dallas this morning.
The flights were made noteworthy by the people seated near me. On the plane from Shreveport was a woman, sitting directly behind me, who apparently was from deeply rural north Louisiana. Somehow, her accent gave her away. The frequency and tone of her exclamations seemed to indicate she doesn't fly much.
Moments that veteran air travelers would scarcely notice (like taking off and landing) brought out this lady's Love of the Lord, or some approximation of it. She started with a robust "Gah Dawg!" Apparently, this is a soul-saving version of the legendary "G.D. curse." One should never take the Lord's name in vain, but it's okay under stress to utter a tribute to a generic canine. The more we moved along, the closer she came to invoking the name of some deity. "For heaven's sake!" was next. Then, as her discomfort began to mount, we got an "Oh mah Loward!" We finally landed safely. She departed while hoping for everyone's safety as she removed her carry-on from the overhead compartment, saying "Ah sure hope ah don't hit nobody in the hay-id with this suitcase." So do we, ma'am. Happy travels.
The next leg of the journey was a regional jet classic. One row behind me was a beleaguered young mother. Her toddler son screamed...SCREAMED in Spanish, without stopping, for the duration of the flight. He SCREAMED SO MUCH that about an hour into the proceedings, he became hoarse. This made the screaming, if possible, more irritating. When we prepared for landing, the poor mom was holding the little guy in her lap. This is, of course, unsafe not to mention a violation of federal regulations. The flight attendant instructed her to put the boy in his own seat with his seatbelt fastened. This led to screaming, crying, kicking and whining. Yes, it all can be done at once, even in Spanish.
I had my Quiet Comfort headphones to help me through. There were people near me, though, who were actually on the verge of tears as they dealt with the frustration. It was so bad that the flight attendant apologized to us individually as we were deplaning.
Oh, Mah Loward. I have never been so happy to be alone in a quiet hotel room.