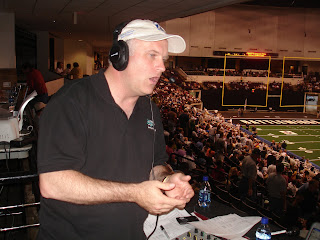 (Bossier City, LA) – The Bossier – Shreveport BattleWings snapped an eight-game losing streak to the Arkansas Twisters, won their tenth game of the season and clinched the franchise’s first playoff spot with a 53-29 win.
BattleWings quarterback Quincy Carter was virtually flawless, completing 21 of 28 passes for 288 yards and four touchdowns with no interceptions. For his efforts, Carter was named the offensive payer of the game.
The BattleWings defense frustrated Arkansas Quarterback Brian Villanueva, intercepting him twice and applying consistent defense pressure, which forced him to rush many of his passes. The Twisters were held without a score until they went 41 yards on 7 plays to get a Villanueva to Jon Schoonover touchdown pass which trimmed the Battlewings lead to 23-7 with 2:03 remaining in the first half.
The Wings, who scored on every possession, amassed the 23-0 lead on the strength of two Jason Schule touchdown runs, a Brian Hazelwood field goal and a 21 yard touchdown pass from Carter to Jamaal Perry. Hazelwood added a 17 yard field goal as time expired in the second quarter to give the Wings a 26-7 halftime advantage.
Schule, who scored three rushing touchdowns, gained 36 yards on nine carries, caught two passes and played kick coverage, was named Iron Man of the game.
The BattleWings opened the second-half scoring by covering 40 yards in eight plays. The drive was capped by Schule’s one-yard touchdown plunge on 4th and goal.
Manwell Talbert led BattleWings receivers, catching eight passes for 122 yards, which included a 42-yard grab from Carter. Perry had 2 touchdown catches, the second a 35-yard reception in the fourth quarter that capped the scoring. P.J. Winston caught three passes for 50 yards and a score.
Phillip Geiggar snuffed out the final Twisters’ threat when he intercepted Villanueva with 2:30 remaining in the game.
Chris Ibezim, who had a spectacular missed field goal return to set up a touchdown, an interception and eight tackles, was named defensive player of the game.
The Battlewings improve to 10-3 in 2007, assuring they will have the best regular season record in franchise history. They also clinched the team’s first-ever playoff spot, and for the moment took away the tie-break advantage for playoff seeding from the Twisters.
The Battlewings will host the once-defeated Rio Grande Valley Dorados in their final 2007 regular-season home game next Saturday. The Dorados’ only loss came at the hands of the BattleWings, 52-48 on April 21st.