A Great Place to Be

Wallowing in the morass of middle age, I watch my children with fascination and a fair dose of envy. My 17-year-old may not realize it, but things are really going his way. He has a part-time job which earns him some walking-around money but minimally impacts his freedom. The cash may actually provide him more opportunity for independence, if you think about it.
He is spending a classic high school summer, hanging around with his girlfriend and-or a buddy, all the while having no real responsibilities. It's the way it should be for a child not of privilege, but as a product of a family who has enough to provide him with a fex luxuries. This photo sums it up well. 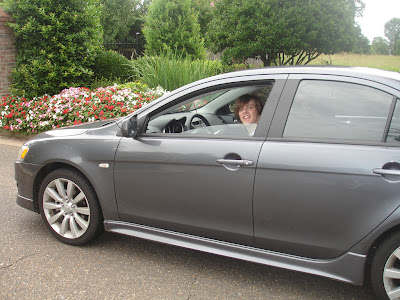 I find myself staring at it. He looks happy there in his car. It's shiny, he's smiling and his surroundings are beautiful. There's hope there, a picture of a contented today with the promise of a brighter tomorrow. At 17, he's ready to launch. His father's image is faintly reflected in the car's finish as the young man looks at him with with a mixture of curiosity and amusement. He is in control of a vehicle which is taking him where he wants to go. In the split second after this photo was taken, the reflection was replaced with another and the boy's father was behind him, remembered but unseen.
What a great place to be.