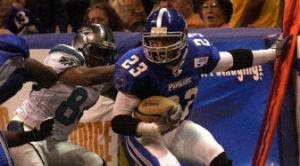 (Wilkes –Barre, PA) – The Scranton – Wilkes Barre Pioneers intercepted three Quincy Carter passes and recovered a fumble at their own one-yard line on the way to a convincing 50-28 win over the slumping Bossier-Shreveport BattleWings. Pioneers’ quarterback Ryan Vena threw four touchdown passes and ran for two more to help his team improve to 14-1. The BattleWings have lost three of their last four games to fall to 10-5.
The Pioneers scored first and didn’t trail. On their first two possession of the game, Vena tossed scoring passes to Tyreak Saviour and Marcus Furman to lead 14-0. The BattleWings responded with a 22-yard touchdown pass from Carter to Jason Schule to make it 14-7 in the first quarter, but that was as close as they would get.
The BattleWings were sill in the game, trailing 20-7 in the second quarter with a 1st and goal at the Wilkes Barre one yard line. Three times, Jason Schule attempted to run for a score. On 3rd down, Troy Blackwell forced a fumble, which the Pioneers recovered. They went 49 yards in just five plays to score a touchdown which made the score 27-7. They never looked back.
Saviour caught two touchdown passes and Buchie Ibeh had one for Wilkes Barre/ Scranton. Terrance Glover ran for a score, as well.
The bright spot for Shreveport-Bossier was wide receiver Jamaal Perry, who caught ten passes for 182 yards and three touchdowns. Perry earned offensive player of the game honors.
Pioneers DB Chris royal, who intercepted Carter three times, was named defensive player of the game, while Wilkes Barre/Scranton’s Dog Harding earned Iron Man honors.
The Battlewings will close out their regular season next Saturday night in Laredo before starting the playoffs in two weeks. Their first-round playoff opponent is yet to be determined.