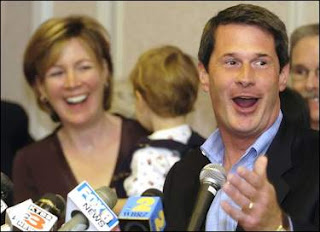 This photo borrowed from the Associated Press brought back a flood of memories for me, as did the story associated with it. The masses have strong feelings about what has been going on with David Vitter.
Anybody runs the risk of having his private proclivities exposed when he runs for public office. Vitter certainly knew he was at risk when he engaged in the activities which have him so much hot water.
Now, it seems he is in hiding, and who can blame him? His demeanor is no doubt in stark contrast to what it was on this night. Work led me to the Vitter election night party. I had not met the man or any of his family, but he and his wife both were engaging as if they were welcoming a new friend. They seemed so happy, almost picture-perfect as their kids squirmed around the room the next morning essentially oblivious to what their father had gotten them into.
The image was carefully crafted, which everyone in the room knew intuitively. Yet, somehow the senator-elect and his wife came across as David and Wendy with their cute, rambunctuous kids. Maybe that's exactly who they are. Maybe their marriage will survive this. Maybe they'll have a chance once again just to be David and Wendy.
For the moment, I simply recall the look I saw in Wendy Vitter's eyes during that evening and morning in Metarie. I swear, I thought it was love and admiration for her husband.