Update On The Sick Person

A couple of months ago, we were in the throes of enduring one of the most stressful times in our family's history. We had someone get hurt, which led to an extended stay in several healthcare facilities. I was careful not to specifically identify The Sick Person, but now I'll reveal it was my older brother.

Happily, he is much better these days, although he still has some work to do. He's home and working moment by moment to normalize his day-to-day activities.

He had a birthday this week and we took him out for Mexican food. He seemed happy. 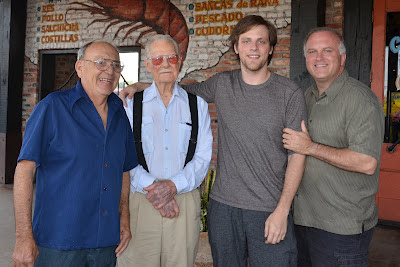 He retired on January 31st of this year and got injured on February 4th, so this "new normal" thing is particularly challenging for him. He has a lot of time on his hands, but his lingering health issues severely limit his mobility. It's a cruel combination.

I revealed to him last week the distressing news that in March, his doctors declared he would never go home again...that his injuries were too profound. Thank God they were wrong about that. It got his attention, though. He realizes now how far he's come and is beginning to grasp that his recovery has exceeded everyone's expectations.

I remember sending an e-mail to interested parties when he moved back to his house after almost four months in a hospital, long-term acute care facility, nursing home/ rehab facility and then a transitional residence. One of his physicians responded by writing "best of luck with this bold move."

Bold, indeed...but it has worked out well so far. Now, we hope he stays on his feet, continues to get stronger and figures out what to do with all of his free time.

Holy celebrity sightings, Batman. You went out for Mexican food with Stan Lee?