We were talking recently about how we take for granted being in constant contact with almost everybody. If you want to be reached, you can be. It wasn't that long ago that you would watch the mailbox when a loved one was traveling, hoping for a postcard.

With our daughter in Europe, we are experiencing a modern-day version of that. Instead of watching for the postman, we're checking Instagram and Twitter for glimpses of her day. So, imagine our delight early this morning when we saw a filtered photo of Big Ben and the Union Jack pop up on social media. 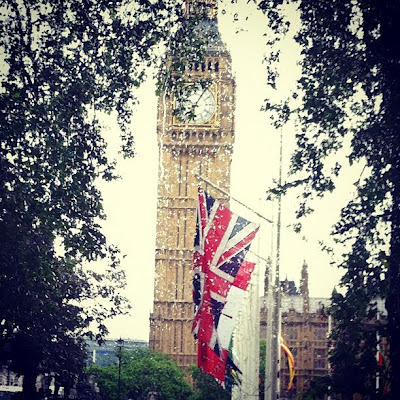 This was posted without comment, assuming I suppose that some things speak for themselves.

I was hoping to discern some of her activities by glancing at her itinerary, but today's plans simply indicated she would visit places "that many tourists frequent." Gosh, it's London. That's a pretty wide net. The only other image to show up out there on the web was Windsor Castle. 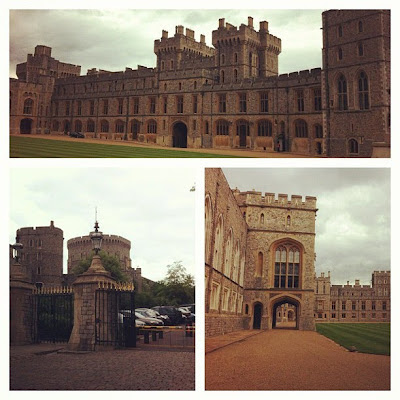 Having never been to London, I can only assume many tourists do, indeed, frequent Windsor Castle.

Hello mother and father! Today was splendid! We took a bus tour around London and got a great tour guide. She was hilarious. Her name was Trudy and she was a hoot and a half to say the least. Then we broke off into groups and got to do whatever we wanted basically. So my group went to Windsor Castle and it was out of this world... We used the tube a lot and got some great practice with the trains so now I'm an expert.

London really is very cool. The city is impressive and the parks are gorgeous. The only downside is the rainy, cool weather. You know I hate the cold. But all the hot guys make up for that. Dang.

Anyway, tomorrow I'm doing some shopping for warmer clothes so be on the lookout. Then we're doing a Shakespeare and Dickens tour, having High Tea, and seeing A Midsummer Night's Dream. Lovely! Spit Spot!

Spit spot, indeed. I was so happy to hear from her and to note her irrepressible sense of humor being seasoned with British jocularity, I laughed out loud. That will make your day. She could have left out the part about the guys, but I'm sure her mother appreciated that.

I got a nice note earlier in the day from someone who has been watching our daughter's travels here and on social media. The note congratulated us on preparing her well to maximize these opportunities. That gave me a sense that the roles are gradually but incontrovertibly reversing. At 20 years old, she's already much more worldly than her parents. That's okay, as long as eventually she makes it home safely.