Hello? Is There Anybody Out There?

(Natchitoches, LA) – The latest opportunity to appear live on your television caused me to dust off the old TV reflexes. I accepted an assignment to host an extemporaneous program between games of a college basketball double-header at Northwestern State. The play by play man and the analyst needed a breather between games and I was thrilled to provide that for them. 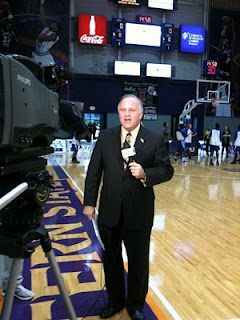 The show was well-planned in advance by the veteran producer. We had a low-key production meeting with the director and the graphics coordinator before we went on the air. I had spent several hours studying for the broadcast, and even re-wrote my notes during the first game so the details would be fresh in my mind. That’s the way it goes when you’re involved in a regional broadcast with a full crew. Yep, a piece of cake.
Game One was a thriller. Northwestern won in overtime. The announcers took off their headsets and dove face-first into a plate of chicken while last-second preparations were being frenetically made for me to take over the air. The transition was rapid. In my ear, I heard “Stand by, Darrell. Here we go...five, four, three, two, one…You’re mic’s hot. Go.”
That’s the last moment when things actually went according to plan.
The guests scheduled for the first segment were not around. The graphics planned for segment two were ready, so we went with those. Something else happened, but I can’t really remember because I just kept talking. Hopefully, it made sense. Those hours of study came into play because I tried to start dropping knowledge. Finally, well before the planned time for break one, I was told to go to a commercial and we would re-set. No sweat. 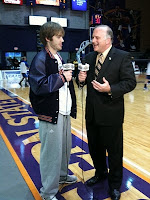 I’ll spare us all the details, but that’s how the show went. The guests finally moseyed over and I think the interviews went well. The planned guest for segment three actually came when he was supposed to be there, but the guest for segment four wasn’t even in the building. At one point, I was supposed to talk back and forth with the announcers, but I glanced over to their broadcast position and they were still fully engaged with their chicken. Fortunately, I thought this was reassuringly amusing. 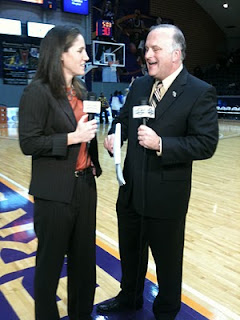 The great folks in the NSU Sports Information office hustled the women’s coach over for a completely unplanned interview. I don’t recall what I asked, but she answered and that counts for a lot.
Somehow, we filled the time. I was anxious to get home and see how it looked on the air. I had set the TiVo and everything. But, then I checked my phone and had several text messages telling me that the local station had dumped out of the coverage after the first game. We were on sixteen stations, I think, but I have no idea how many aired the between-games offering we muddled through.
I got an e-mail later in the day from the director saying I had done a good job and thanking me “for keeping us on the rails.” So I guess it wasn’t a complete disaster, although I’ll probably never get first-hand confirmation of that. I have to admit, if I truly didn’t embarrass myself or the network, rolling with the punches like that was a lot of fun. It’s good to know my broadcasting brain hasn’t gone into complete atrophy.