Standing Tall in a Sea of Purple

I suppose it’s not politically correct, but the legend of Chief Caddo lives thanks to a college football rivalry. My wife and I had a close encounter with the Chief, who has been standing tall (7 feet, 6 inches to be specific) since 1961. 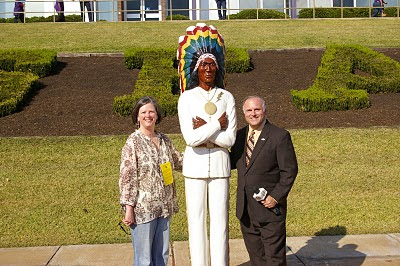 The chief is semi-nomadic, moving back and forth between the campuses of Stephen F. Austin State University in Texas and Northwestern State University in Louisiana. His residency issue is decided annually. The winner of the game between the schools’ football teams gets custody of the Chief.
It’s the largest trophy in college football, and its pays tribute to a tale about the founding of the two cities which are home to the schools. As the story goes, a chief of the Caddo tribe who made his home on the banks of the Sabine River had two sons. He sent one traveling east and the other traveling west. Where they settled became Nacogdoches, home of SFA and Natchitoches, home of NSU.(Read more about about that here.)

Chief Caddo will reside in Texas for at least another year, because the SFA Lumberjacks won the game and earned a conference championship in the process. For the second time this season, I was pressed into duty as the on-field host for the trophy presentation. 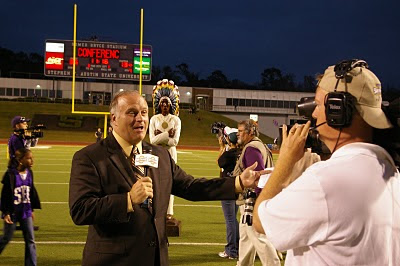 The home team celebrated and had me surrounded. They accepted the conference championship trophy with glee, but it was Chief Caddo who had their attention. 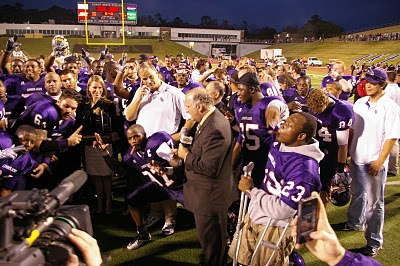 It took about a half-dozen of them to carry him to midfield for the ceremony. His expression never changed, but as someone who has known the chief for a long time, I can tell you he was in a fine humor. He’s not getting any younger and moving can be such a hassle.