The Face That Frightened Houston

(Houston) – I was going about my business on the floor of Reliant Stadium. In the closing moments of a tight football game between Stephen F. Austin and Sam Houston State, strategy was necessary. We were on live TV and the task at hand was to nab the winning coach for a live post-game interview. There was a three-point difference in the score, so it was anybody’s ball game. SFA had led the whole time, but SHSU was keeping it close. 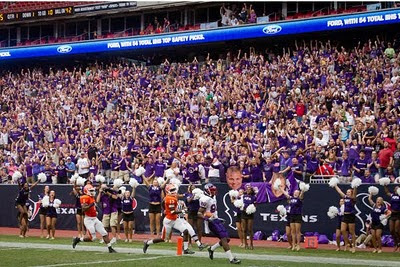 I stationed myself on the end line of the south end zone, midway between two tunnels and prepared to make my move when unexpectedly an attractive young woman in Houston Texans gear walked up to me, 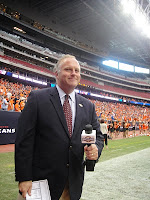 introduced herself and asked “Are you the sideline reporter?” I said yes, and then she said, “Great. Here’s the microphone for the on-field trophy presentation.” Um, do what?
Well, nobody told Darrell, but stadium operations was counting on me to go all Terry Bradshaw/ Jim Nantz and hand the trophy to the coach of the team that won The Battle of the Piney Woods. I didn’t mind, of course; but it would have been nice to know ahead of time. Next thing I knew, my craggy old mug was on the JumboTrons at an NFL stadium as I was surrounded by the team that won the latest game in a storied Texas rivalry that dates back to 1923. I later discovered the proceedings were broadcast live on TV, too. Sometimes, you’ve just got to roll with it, baby. 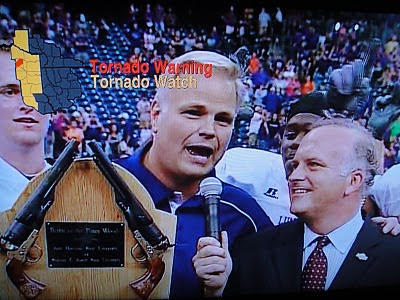 Long ago, I gave up on the idea of making it big-time in TV sports. Maybe I got the tiniest taste of it on this trip. My pass said I represented network TV. I mean, it’s technically true. I was working for the conference’s TV network; but, you know, in that setting you think CBS or FOX or something. 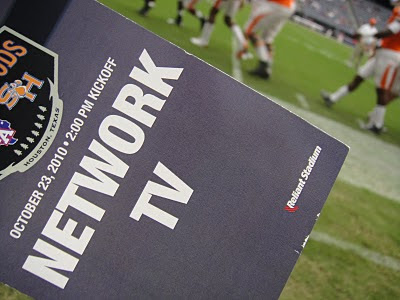 We were in an NFL Stadium, so that was a little kick in the pants. This game was moved to Houston to help set it apart, and by all accounts the event exceeded expectations. Fans turned out in record numbers. The stadium operations people put on a big show, displaying all the gizmos and glitter they put to use on Sundays. They even fired the loudest little cannon you’ll ever hear whenever there was a score. 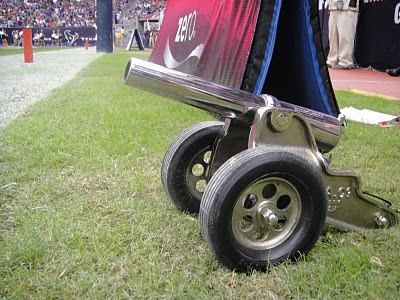 It was a fun afternoon, but I have to admit it felt a little ridiculous to be in the middle of all that post-game commotion. 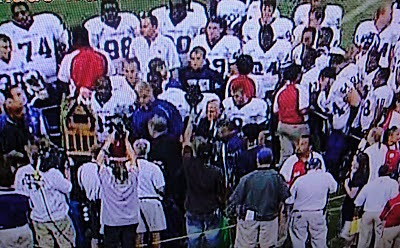 It worked out, though. I figured after more than three decades of covering college football I had done just about everything I was destined to do. So, it was nice to have a new experience. I just wish I had known it was coming. That’s okay. Somehow I don’t think Jim Nantz is worried about it.