My daughter awoke this morning complaining that her feet hurt. It's no wonder, given she has chosen style over comfort this weekend. Formal occasions on consecutive nights can leave a lady with an aching head, as well as sore feet. The party has been non-stop, and somehow shoes played an ongoing, sometimes hilarious role in the proceedings.
Let's start with prom night. Parents dutifully assembled at a lovely South Highlands home to take pre-party photos.

My daughter, who looked exceedingly beautiful, and her date were running late. I spotted them coming up the sidewalk and noticed that he seemed hobbled somehow. He was carrying one of his shoes.
The rented footwear that accompanied his tuxedo was tragically flawed. The sole completely separated from the top of his shiny shoe, creating a giant flap from heel to toe. This was, of course, uproarious to me.
He was a good sport about it, but having nonfunctional footwear was clearly a distraction. We brainstormed possible solutions, including lending him some shoes; but the kid has big feet.
The father whose house was hosting the photofest alertly brought out a hot glue gun in a effort to keep things together, so to speak. But the sad shoes simply could not hold up to normal wear and walking. Considering dancing was presumably in the plan for later, something had to be done.

Ultimately, an ingenious promgoer found a roll of duct tape and slapped things together well enough to get them through the night. 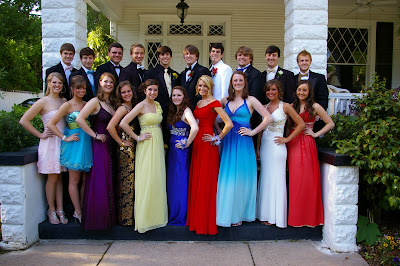 The group photo is nice, but something is amiss. While my daughter knows everyone in this crowd, truthfully these are mostly his friends and their dates.
So, it was off to another location where we had a rendezvous with faces substantially more familiar. The core four, my daughter's most consistent group of friends, were among the guests at a fabulous garden party. 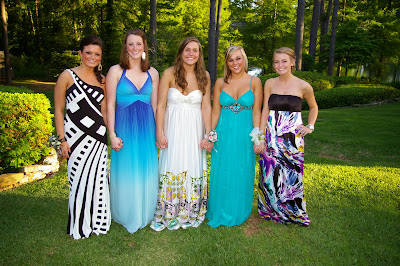 For an hour or so, we couldn't take more than a few steps without running into someone who was photo-worthy. The night was perfect for dinner on the grounds and all the young people cleaned up nicely. 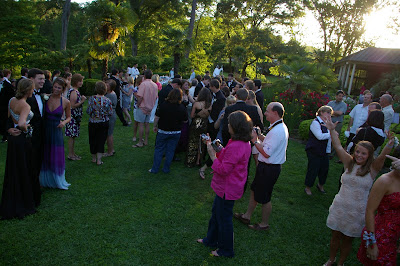 For my wife and me, it was another emotional evening as we saw dozens of young women we have known most of their lives. There was the girl who lives across the street, the closest my daughter will ever come to having a sister. They speak or see one another on a daily basis. 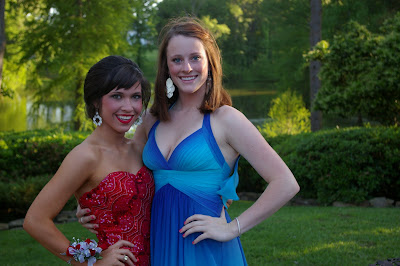 And another who was among my daughter's closest grade school friends. She was the first of my daughter's contemporaries to whom I felt particularly close.

They went to different middle schools and drifted apart, but thankfully they have been at the same high school for four years, so we still see her and hear about her often. As they go through the paces of the last weeks of high school, it's interesting to see them acknowledge the longevity of their relationship. It's had its ebbs and flows, but you know they still love one another. That means a lot, because those kinds of friendships certainly can pay dividends in the years to come.

There must have been a dozen or so similar encounters along the way.

By all accounts, the dinner party was a fabulous success. Her friends were there. His friends were there. Happily, as she put it "there was surprisingly little drama." This revelation is remarkable given the ages of those involved. Or, maybe not. As you can no doubt tell, they're growing up fast. Long dresses, tuxedos and fancy footwear can convince you to be on best behavior. Plus, you can tell when people genuinely like one another. It makes being a good sport about things kind of easy. 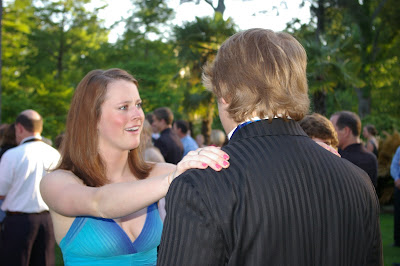 I'm sure I may never know everything that happened during the course of the evening and the following morning. I hear people were still awake and running around at 5:00 a.m. It was prom night and that comes with the territory. If you can't stay out all night for your prom, when can you? Her date seems to be a good kid. I know he's talented and funny. He treated her well, and that makes him okay by me. 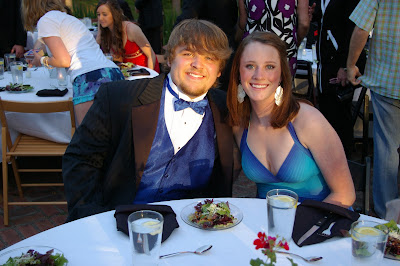 Prom may have been the highlight of the weekend, but it was just one milepost along the party highway. A night earlier, many of the same people gussied up in different floor-length dresses for a downtown ball. 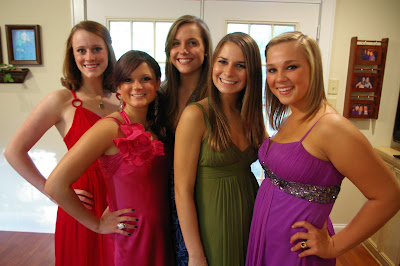 This was an event hosted by The Plantation Club.

It involved the presentation of a court, as well as apparently fabulous food and free-flowing spirits. Since we are not members of this organization, the purpose of it remains something of a mystery to me. But, they have a swinging soiree every spring and the girls were invited. So, off they went...up the steps and into the inner sanctum of the Plantation Ball. If you're 18 and fabulous, why would you not go?

The dynamic was decidely different. The girls went in a group, without dates. Additionally, there evidently was some relationship drama late in the evening spicing things up a little bit. Maybe that was good news, because it set the stage for a relatively peaceful prom.
The weekend wraps up with two graduation parties, where thankfully casual clothes and sensible shoes are in order.
The lesson learned: parties can be good for your soul, if not for your soles. 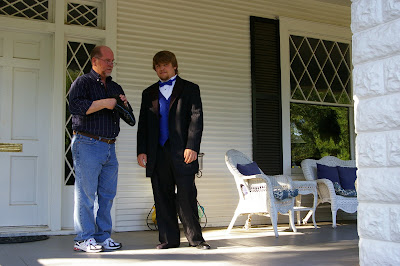