(New Orleans) - Our weekend getaway was going remarkably well. We spent Saturday afternoon touring the remarkable National World War II Museum. It may not be the first thing that comes to mind when you think of visting New Orleans, but I've been four times and I unconditionally recommend it. 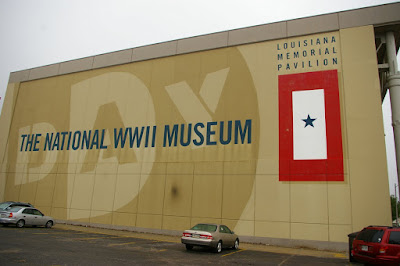 Each time I visit, I see something new, and the exhibits are so well done, they tell the story of the war with great clarity. At 18, our daughter just soaked it all in. She expressed disappointment that we did not set aside more time to spend there. It could easily fill up a day if you were so inclined. 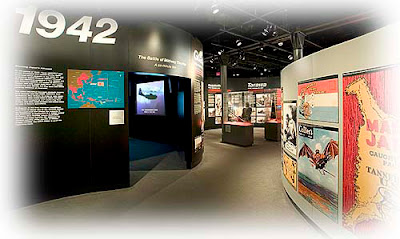 We were pressed for time, because the true purpose of our trip was drawing near. 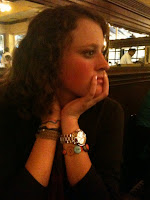 We hustled back to the hotel and dressed for the evening. Dinner at Dickie Brennan's Palace Cafe was delicious, and it was stratgically located near our hotel. So we watched folks stroll by on Canal Street for a while, then found a taxi and headed for the Mahalia Jackson Theater to see the Broadway Across America production of the Tony Award-winning musical "Wicked."

The ladies were excited. The tickets were expensive. My wife had seen the show in Chicago. My daughter had heard many of the songs and had seen video clips of several performances. She had heard the signature song, "Defying Gravity," performed live by a couple of Broadway veterans and it took her breath away.

The theater was packed and once the curtain was raised, the show did not disappoint. The vocals were soaring, the production and costumes were first rate and the story was entertaining and amusing.

The musical is a prequel to "The Wizard of Oz," telling the story of the relationship between Glinda the Good Witch and her green friend who would become The Wicked Witch of the West. I have to admit, it was fantastic.
Well, the first act was.
Shortly after intermission, the theater went dark. 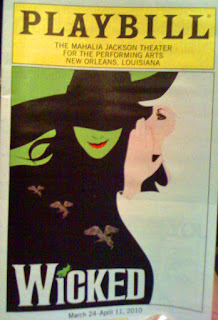 We in the crowd were advised that there was a mid-city power outage and that we should just stay in our places and be patient. We did. People seemed to be in a good humor about it.
Then, about a half-hour later, we were told power would not be restored before 2:00 a.m. and there was no way the show could continue. The crew gamely wheeled an upright piano onto the stage. The two witches came onto the stage, and illuminated by flashlights, sang an acoustic duet of the song that would have been their big finish. We, the fans, rewarded them with a standing ovation. Then, we were told to be careful going home.
That's it. See ya. It was a crushing disappointment. They didn't invite us back the next day. They didn't have a solution. We drove six hours just to see this and spent hundreds of dollars on tickets. We spent hundreds more on gasoline and a hotel. It was the centerpiece of our trip. We had fun otherwise, but what a letdown.
Plus, I have heard over and over again that the show has a clever and satisfying conclusion. I sure would like to see it.
Someday. Somewhere Over the Rainbow, I guess. Sphere: Related Content