There is a great sense of relief and dread in our house. A college decision for our daughter is final and official. TCU, it shall be. For months, she has been leaning heavily toward attending Texas Christian University in Ft. Worth, and now the deed is done. 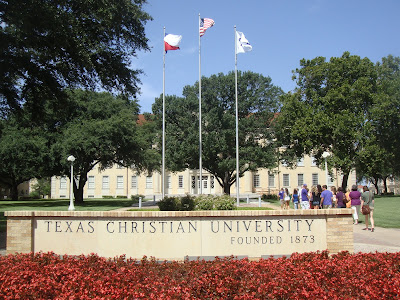 A scholarship offer has been formally accepted, registration and housing fees have been paid. Offers from other schools have been politely declined. A roommate has been identified. The relief comes from having a major life decision behind us. The dread comes from the certainty that our daughter will be leaving home in four months.
Her mother cries just thinking about it.
Preparations are earnestly under way. 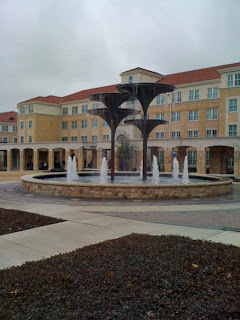 In fact, the ladies are in Ft. Worth this weekend in an effort to get College Life rolling. Shopping is planned. There is something to do with sorority rush, but I'm not plugged into all that. I know that one of my daughter's friends, a TCU student, has invited her to a party on campus tonight. (Yikes! I know, I don't want to think about it.)The future roommates and their mothers are planning a get-together.
So, I guess it's time to load up on TCU gear and hope that the football team, which played in the Fiesta Bowl earlier this year, will be good again. I may be spending more time in Dallas-Ft. Worth over the next few years than I ever truly anticipated.
TCU seems lilke a wildcard choice, doesn't it? I've been asked often "Why TCU?" I don't have a simple answer. We visited many university campuses and that's where she feels she belongs. She has a strong sense of certainty about it, and how can you argue with that? Sometimes, you have to go with your gut.
So...Go, Frogs!