Witness to a Rivalry That Really Isn't One 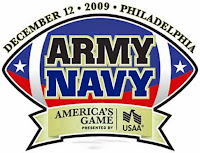 The annual showdown between the football teams from the United States Naval Academy and the U.S. Military Academy is advertised as “America’s Game,” and concurrently “The loudest game in America.” Historically, it was played on Thanksgiving weekend. Then, it was moved to the first weekend in December so that it could stand alone. The emergence of conference championship games across the college football landscape sent Army-Navy into the margins of the football-watching consciousness. As great a tradition as it is, it’s usually not a prominent football game. This year, it was played on the second Saturday in December where it truly had the football spotlight all to itself. Given an opportunity to attend the game with a Naval Academy graduate, I leapt at the chance. This game is so meaningful to its participants, as well as to soldiers and sailors the world over, that it I was honored to be included.

Glancing at the surface of the event, it certainly looked like a football game. It is staged at a neutral site, most often Philadelphia. This is a geographical middle ground between Army’s home base at West Point, NY and Navy’s at Annapolis, MD. Beforehand, there were acres of tailgaters with all the traditional accoutrements. 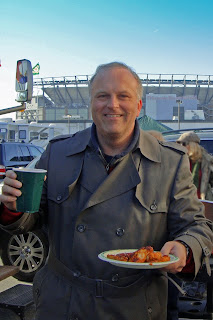 I was fortunate to be in an affluent group which offered an abundance of food, drink and entertainment. As I enjoyed my chicken wings and a Bloody Mary, I began to take note of my environment. These were not necessarily football people. They were military people attending a football game. The distinction is profound. The affable guy handling the grill duties was doing so at the behest of his commander, I discovered. The overwhelming majority of the people who surrounded me were active duty, Army and Navy, or their relatives. Try as they might to be casual, there was no question that everyone there was aware of everyone else’s rank. So the social dynamic was, from my civilian point of view, way out of whack.
As was the manifestation of the rivalry, such as it is. From a “Tiger Bait” background, I observed “Go Navy. Beat Army” with a sort of detached bemusement. As soon as that stinging barb would be thrown, opposing fans would then become respectful and collegial. The overriding truth is this: with the exception of the game itself, they truly do play on the same team. Navy fans, with a winning season and a bowl berth for their team in hand, found themselves torn. An Army win would give the Cadets a bowl berth, too. A loss would mean the game is the last time any of the Army seniors would wear a football uniform. Their military commitments require them to don something decidedly different in the years ahead.
As the game approached, the festivities began. As tradition mandates, the entire student bodies of both academies attended the game, and they marched into the stadium in formation. 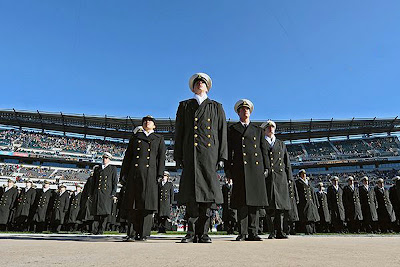 Parachute teams from both branches of the military jumped into the stadium together. 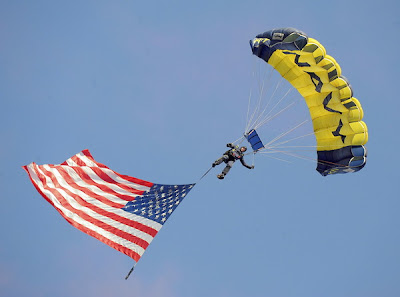 The United States Secretary of Defense, Robert Gates, performed the coin toss to determine who would kick off. 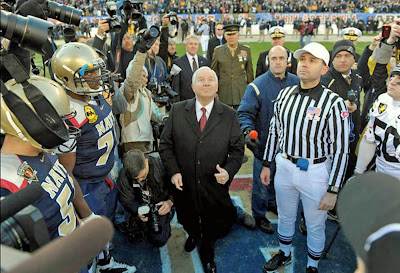 (This was a far cry from LSU-Mississippi State in so many ways.)From my perch high in the north end zone of Lincoln Financial Field, this had the trappings of a big football event. The stadium was sold out, the pregame ceremonies put a lump in your throat, and certainly the outcome of the game had post season implications. 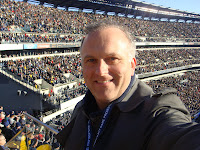 The experience in the stands wasn’t like anything I had witnessed. The conversations around me were polite, often perfunctory. There were no other games across the country for which scoreboard watching became a necessary diversion. Everybody sort of had the same haircut. I know that sounds strange, but remember this is a military crowd.
The first half was a tightly-contested defensive struggle. 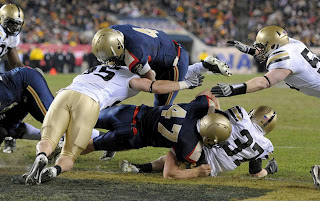 Ultimately, Navy won 17-3. The Army players, in an instant, were transformed into soldiers once again. 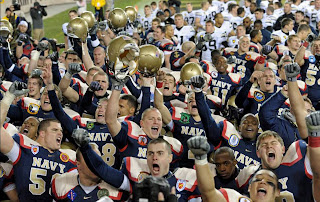 The Navy players celebrated and so did all the students. The entire brigade was given the night off by their Commandant. That meant they had essentially 24 hours of operational freedom before they had to make it back to Annapolis for Monday morning maneuvers and a rigorous class schedule. 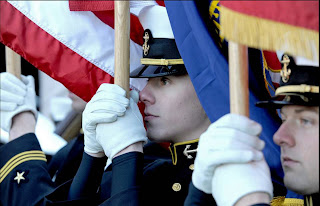 Unlike players at other schools, sleeping in to start the week isn’t an option.
America may have been watching, at least it should have been. There’s no disputing the profound meaning underlying this game. It wasn’t so loud, though. The players and fans have too much respect for one another to condone all that.