If Christmas is about family, then we've got it covered. Every Christmas Eve, we get together with many of The Cousins, and this year the gathering resulted in this remarkable photograph. 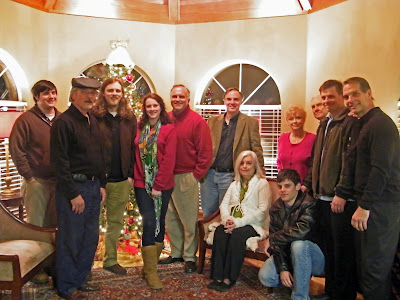 I didn't mean to be in the center of things. It's just a coincidence. There is logic to it because I am the youngest person in my generation of cousins. My children are there as are the children of a couple of my first cousins, which would make them my second cousins I suppose. Peeking around from behind my second cousin the football coach is my father, the oldest person in the photo by a mile.
Remarkable? My father is the last man standing, the youngest of 14 siblings. All thirteen of his brothers and sisters have passed on. For him, every person in this photo is a son, grandchild, niece, nephew or the son of a nephew. Perhaps it's even more remarkable that the image doesn't even come close to representing a majority of the cousins. Fourteen siblings in the generation before me, remember.
But here's the best part about this picture: In order to be eligible to be in it, you had to have "Rebouche blood." This means the wives, several of whom have been in the family for more than a quarter-century, were just irrelevant. High hilarity ensued when my wife and some of the other in-law stalwarts explained this phenomenon to the youngest among them, the football coach's wife. As it became clear to her that she was indeed excluded from the proceedings, she was simultaneously aghast and amused.
The best part about our annual cousin confab is the food. We try to cook "like the old people," which means a lot of salt, grease, butter and fatty meats. That's my kind of Christmas!
It's too bad that there's only one of the "old people" left to enjoy it. Here he is again, peeking around the corner at his blood relatives after they had their fill of fatty food and family ties. 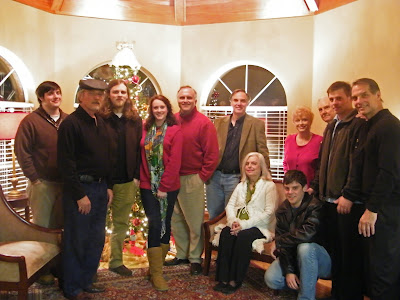