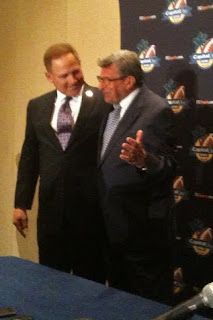 (Orlando) - The coaches who will match wits in the Capitol One Bowl, Les Miles of LSU and Penn State's Joe Paterno, spent some quality time with the assembled media today. As is so typical with these kinds of events, no real news emerged. Nonetheless, for a college football fan it was rewarding to listen to Coach Paterno hold court for a half-hour or so. He loves college football and all it stands for. His memories, wit and philosophies held the attention of the normally cynical media crowd. One broadcast journalist said privately, "When he finished talking, I just wanted to applaud." Maybe the reporters from Pennsylvania didn't feel that way, but it was a rare treat for the Louisiana people to have this much exposure to the Archbishop of the game.
We spent some time in and around Citrus Bowl Stadium. It's an aging facility, but the game's organizers have put a lot of effort into gussying the old girl up. 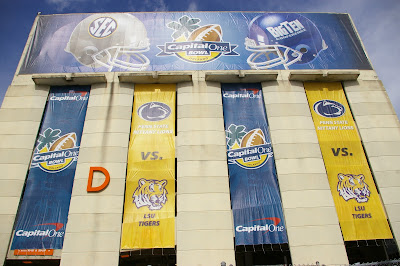 The turf will be an issue. There was another bowl game played there earlier in the week and four high school games have been contested there recently.

Some new sod and a whole lot of paint will make for a pleasing initial presentation. There's rain the forecast, though, so that pretty paint job will likely get plowed up rather quickly.
I'm earning my keep by handling the business end of a TV camera.

The old skills come back in fits and starts , but I'm not as young or proficient as I used to be. It's fun to be able to parachute in on events like this, but as I watch the people around me work I once again affirm my reasons for not doing it full-time. Resources for local media are dwindling, while at the same time demand for content escalates. Translated, it means they are being asked to do a lot more with significantly less.

When you're under that kind of pressure, it just sucks the fun right out of the job. Nobody's complaining, though. They're still getting paid to travel to a vacation destination to watch a football game. Who can poke holes in that?