Getting Good at Surviving the Cold

Another late December and once again I hauled the women out to a bowl game. 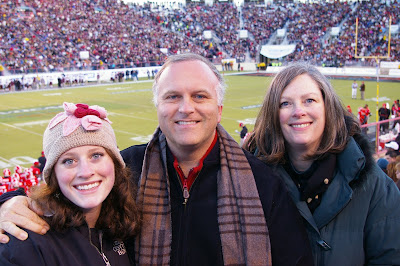 As we sat in Independence Stadium watching the Georgia Bulldogs dismantle Texas A&M, we agreed that last year at the Music City Bowl, we were much more uncomfortable. There were many differences this time around. We were much lower in this stadium than we were in Nashville, which meant we were not subjected to a lot of wind. Also, instead of traveling across several states, we just went across town. That meant we felt no real obligation to hang around any longer than we really wanted to. So, once the Aggies had no prayer of mounting a comeback, we joined the rest of the locals in hitting the highway.
Another difference: my daughter had company. 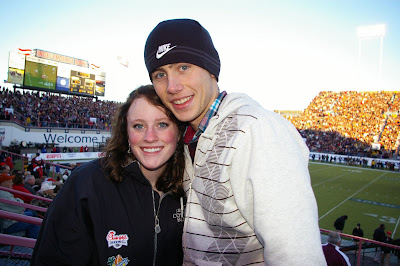 Happy Couple II was preposterously underdressed for the occasion. I know when you're young and involved in a long-term relationship, there is a certain romance in the idea of "keeping each other warm," but proper clothing can't hurt.

Let's put it this way: after one possession in the fourth quarter, we suggested leaving and no one objected.
I've attended 33 Independence Bowls now (but who's counting?) and this one appears to have drawn one of the three or four largest crowds ever to the stadium.

LSU has played here twice and packed the place. It would be difficult to pinpoint a larger crowd from among any of the other games. This is all the more remarkable because kick-off was at 4:00 on a weekday.
By the time the game finished, the place was almost empty, though. We all had enough sense to come in from the cold.