Suddenly, I Became Part of the Paparazzi

(Annapolis, MD) – As evening fell on my invigorating tour of the U.S. Naval Academy, the traveling companion and I were drawn to Lejeune Hall, the on-campus swimming, diving and wrestling facility.
He wanted to show me the plaques honoring athletic achievements of Midshipmen athletes throughout the years, which was great. When we walked in, there was a swim meet going on. This thrilled me. It was warm and humid in there, plus there was a sporting event happening live! This held no appeal to him, but I pretty much insisted we walk in for a while. As we entered the natatorium, a couple of women were engaged in an animated conversation along the lines of, “I can’t believe he’s here!” “This is amazing!” This is so exciting!” They turned to me to bring me into the conversation as if I knew what they were talking about. I did not. “Hold on,” I said. "Who’s here?"
“Michael Phelps!” 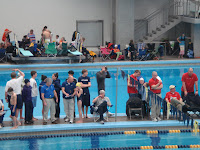 Michael Phelps, 14-time Olympic gold medalist swimmer, one of the most recognizable athletes in the world, was swimming for the Baltimore Aquatic Club in this random meet in December. They pointed to a spot poolside, and there he was: Michael Phelps, walking along preparing to swim his warm-ups. 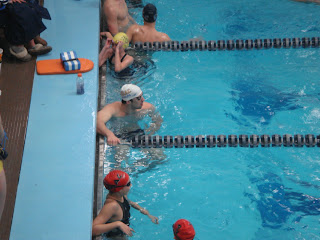 Wherever he went, all eyes were on him. People could not stop staring. Rarely starstruck, I couldn’t help myself. This brush with celebrity was so unexpected. Cell phones and cameras were strategically aimed at all times. I admit to sending photos to my family back in Louisiana just to get their reactions. Somehow, to have an athlete of this caliber competing in an event that involved college athletes as well as young children was simply difficult to process. 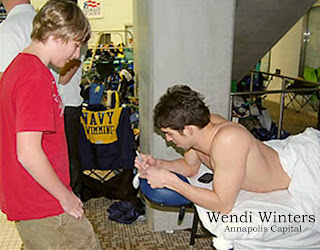 Phelps tried to go about his business, but was interrupted often by swimmers and parents alike who wanted a photo with him or an autograph or both. We didn’t hang around very long. I read that he won all of his races. Count that as the one thing about the evening that didn’t catch me by surprise. 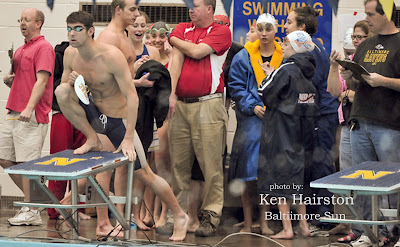