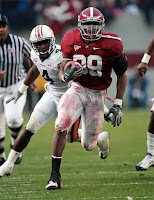 Just in case you were wondering, you can make it from the parking lot of Bryant-Denny Stadium in Tuscaloosa to my garage in six hours. However, on game day it takes three hours and forty-five minutes to get from a hotel room in Birmingham into the press box.
In Birmingham, three and a half hours before kickoff, it took us an hour and ten minutes to travel eleven miles on an interstate. It was all gameday traffic, I assure you. Keep in mind, Birmingham is more than fifty miles from the stadium.
There were times when traffic moved at a reasonable interstate pace, but most of the time the assembled masses were cruising along at about seven miles per hour.
-----------------
LSU fans claim Tiger Stadium is the loudest in the SEC, but I've been in Jordan-Hare and Bryant-Denny this season and trust me, those Auburn and Alabama people in full throat rival Bayou Billy and Tiger Tommy. Put them together in one place and you have something.
----------------
If you have satelite radio, you are spoiled on the road. You can listen to so many games or any kind of music or talk you want. When you don't have it, you really miss it. Our rent car was equipped with a receiver, but the unit wasn't activated. I took a shot and called my frends at XM. After the requisite recorded voice menu gauntlet during which I gave my phone number, address and other identifying information, I was connected to an actual human who asked how she could help.
I explained that Traveling Companion and I are XM subscribers but we were in a rental car and we were wondering if we could somehow activate the receiver in the rent car for 24 to 48 hours. She asked for the radio ID. I was hopeful.
She said, "That receiver hasn't been activated."
I said, "I know. It's a rent car. We were hoping you could just turn this one on for a couple of days."
She asked for the radio ID for my primary receiver. I said, "I dont know. I'm not in that car. I'm in a rent car." So, we looked up my account by asking for my phone number (which I had given, as you recall, earlier).
She said, "I see you have 'XM Everything.' Is that what you would like to have on this second receiver?"
I said, "How much will that cost for 24 or 48 hours?"
She said, "Sir, the service is for a minimum of one year."
I said, "But, I told you this is a rent car and I just want the service for the weekend. That, in fact, was the first thing I said to you."
She said, "I'm sorry, sir. I must have misunderstood."
I said never mind. She said, "Thank you for calling XM."
Now, XM and Sirius have merged. I can only imagine how customer service will be the next time I call.
-------------- 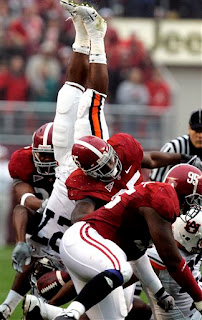 Auburn was never in the game. Since we were there to court them if they won, we decided to leave early to beat the traffic. We had learned our lesson earlier in the day. This allowed us to listen to Crimson Tide broadcasters for the 4th quarter and post game. The team finished the regular season undefeated and ranked #1 in the nation. Although they must win twice more to hoist the national championship trophy, it is easy to get an undeniable sense that Alabama fans believe the top of the heap is their birthright. That's where they feel at home.
--------------- 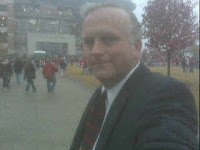 Random personal observation: I crossed paths with representatives from many bowl games this season. Most people were somewhere between cordial and nice. For my money, the people from Atlanta were outstanding and personable. By far the most open and friendly (and for some reason this surprised me. I can't tell you why) were the Sugar Bowl representatives. Maybe it's a Louisiana thing, but the pleasant people from New Orleans served as a reminder that I need to spend a couple more weekends a year in their city. Who knows? Maybe I'll go to the game.
--------------------- 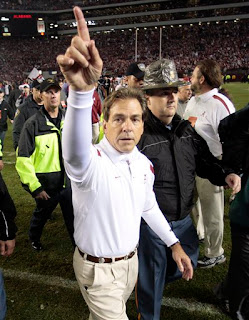 If Nick Saban wins a national championship this year, LSU fans will be puking boudin until September. I still have an LSU coach's shirt that Saban gave me during his second year in Baton Rouge. Now, I have an Alabama coach's shirt that I got during his second year in Tuscaloosa. I still haven't figured out when and where I'm going to wear it, but I'm thinking about sporting it around town just to find out how many people yell at me. Think I can get a state police escort?