Daddy D in the News

Howdy from the press box
Originally uploaded by Darrell
Having spent the majority of my adult life compelling people to speak for publication or broadcast, seeing myself quoted in newspapers has kind of an inside-out feeling to it. My mission was to raise awareness of the Independence Bowl in certain circles. So, with a nod to our departing president, "Mission Accomplished!" I was quoted as a representative of the game on the front page of the Nashville newspaper on Sunday and spoke of the bowl game in another story which was distributed by the Associated Press and Gannett News Service. 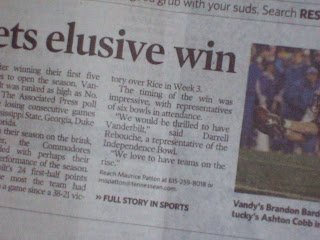 Our bowl game has been around for more than three decades and we're proud of it. The Traveling Companion and I rubbed elbows with representatives of games in much larger cities, most of them from NFL markets. One of the strengths of our event is that it's the only game in town, so visitors get a lot of attention from hosts, locals and the media.
We still don't know which teams will play in our game. We've had Alabama each of the last two years, and they're currently #1 in the nation. Eight Southeastern Conference teams have come to town, as well as many from the Big XII. We've even had Notre Dame. We've also has UTEP, Southern Miss and Miami of Ohio and all are welcome despite the disparity in national notoriety.
This was my first time to be a front man for the bowl and I was proud to do it. I just hope I didn't embarrass the bowl game or the city. I don't know how my superiors in the organization will measure my performance, but getting the name out there in the media means something. Now, we just need to get a couple of nice teams to come to down just after Christmas. Sphere: Related Content