I'll Never Be a Hunter

I've never been deer hunting, and if I had any expectation of cultivating an interest in that sort of thing, it's obliterated. Earlier this week, I saw several deer grazing in a field near my house. I eased my car onto the property, slipped my camera out of the back and squeezed off a shot or two from a great distance. Of course, I scared them away. 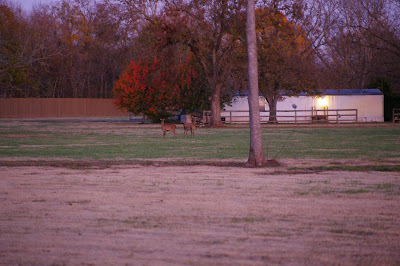 Maybe it wasn't me. As I was preparing to snap my photos, someone pulled up beside me to ask what I was doing. I said I was "shooting the deer." Dude freaked a little. "You're not going to kill those deer!" "No," I said. "Shooting photos." He calmed down immediately. The images were most disappointing.
Of course, I am determined to get better photos. I saw the deer three evenings in a row in the same spot, so I convinced my wife to join me on a deer stakeout. We plopped ourselves behind a tree and hung out for an hour and a half.

What you lookin' at?
Originally uploaded by Darrell
As you can see, she became bored and a little perplexed. There were no deer. I told her it was her shocking blue hoodie that scared them away. Everybody knows deer have a keen eye for colors that don't occur in nature.
Actually, I have no idea what a deer's senses are like. I just know I don't want to kill anything for sport and I didn't like sitting around hoping for a deer to show up. You can't count on a deer. The good news is, the weather was beautiful and so was the company. So, it wasn't so bad after all. Just don't expect me to cover myself in camo gear and squat in a tree all day to get my pictures. Sphere: Related Content

It was the hoodie. Also the fact that there were two of you. Deer have an awesome sense of smell. They smell one person well enough; when there are two, you can forget about it. That's why hunters use their secret weapon- deer lure. (pee scented spray). Not THAT desperate huh?

Hey....just come to my house.....deer are in our yard every day. Glad you don't want to shoot to kill....I just can't understand the enjoyment of that???