A House in Disarray

The stove will be cold at our house on Thanksgiving. That's because it's outside in the garage. This hole is where the stove should be. 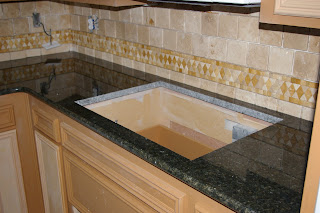 We are remodeling the kitchen and shockingly the contractor hasn't finished in a timely fashion. It's not that bad, actually. We don't have a sink or a dishwasher, either. So, this means eating out a lot. Oh, sure, we could have sandwiches and things heated up in the microwave. Until yesterday, though, we had no countertops.

We have no table space, either, because the contents of our kitchen are piled up in the dining room. We are doing our part to stimulate the stagnant economy by dining at reasonable restaurants and generously tipping our servers.
Forget about keeping the house clean, by the way. Sawdust rules the day with dirt tracked in by the workers making a case for control. The guys practically live here now. I know they're here in the morning because the dog starts wagging her tail when she sees them through the window. That tells you how much they've been around.
This project is more "Maintenance used as an excuse to update" than a true remodel. We're not increasing or reconfiguring the space, we're basically redecorating. Since I have no imagination for this kind of thing, I'm just going on faith that everything will look nice when they're finished. 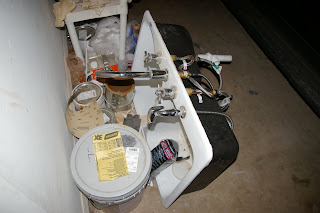 If it doesn't, we're stuck with the look. It will be at least another decade before we tackle anything like this again.
In the meantime, we will have a catered Thanksgiving at my mother-in-law's house. No muss, no fuss. I think I actually like it.

Is that "Ubatuba counter top"? Looks great and goes great with your backsplash wall tile. Ahhh...the joys of remodeling & makeovers. Finished ours last year about this time and chalk it up to another learning experience. Ceramic tiled flooring we wound up doing ourselves after our Tile guy failed to show 3 times in a row and next-to-impossible to find a replacement who didn't see new Truck payments in his eyes.

Just keep writin' them checks and tell yourself "...it'll be over soon..."