A Wet Face in the Crowd 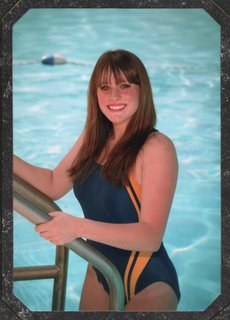 Somewhere in the small type of a future local newspaper, in the section of the sports page known in the business as the “agate,” you will find the name of the 2006 13-14 girls’ city champion in the 50 meter backstroke. It’s worth mentioning because she lives upstairs in my house.
My daughter is a competitive swimmer in the summer only. She tried the year-round bit, but the commitment was too much for her. Even now, she’s juggling the city swim meet with All-Star softball practice and gymnastics. She’s what her kindergarten teacher called a ‘go-go” girl. Most days, she wakes up and has to go, go, go.
She’s proud of her accomplishment in the pool, and she should be. There’s a banquet planned at which she will be presented with a gold medal in front of her teammates and their parents. She’s skipping softball practice for that.
She had the second-fastest qualifying time in the city, so her win is the mildest of upsets. The strange coincidence is that the fastest qualifying time belonged to a girl who lives on our street, five doors down. They are the same age, have been softball teammates and have been riding the school bus together for several years. They’re friendly and familiar with one another. Before the race, each was sure that the other would win. There’s was almost a full second’s difference in their times, which was not encouraging for our camp. Yet, somehow my daughter shaved more than a second and a half off her personal best time, right when it counted the most.

I watched the race. She kept an eye on her neighbor, who was in the next lane, all the way. It is clear that having that friendly competition made the difference.
To her credit, though, here’s what she said to me: “I won, and I got twenty points for the team!” You have to like that. Now, I need to convince her to swim competitively for her high school. Dare I think scholarship?
I think it might be better to concentrate on her grade point average and not her times in the pool. But, hey, a dad can dream. 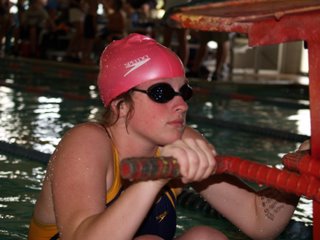 Congrats to all in the Rebouche household!

Where I grew up, if a teacher thought someone was a go-go girl, it ment something far different than what you describe.