All About California Trippin'

Stockton, CA (June 23, 2006) 4:30pm PDT- Exactly fourteen hours ago, I was standing near my car in Bossier City, Louisiana. Now, exhausted and surprisingly amused, I am grateful to be still and quiet.
I’ve been looking forward to this trip to northern California, even if it is not for pleasure and it’s just for two days. I knew virtually nothing of Stockton until a couple of hours ago. That’s no knock against the place. I had just had no occasion to think about it until now, when work brings me to the beautiful banks of the San Joaquin River. I was thinking that I would get a brief respite from the stifling heat at home. That shows you what I know. It’s 106 degrees here right now!
The journey has been arduous. Twenty-five grown men, many of them young and considerably larger than I, jumped on a little charter van at 4:30 Central Time and did our best sardine impersonations for almost four hours. For reasons unknown to me, we flew not from Shreveport, but from Dallas. We flew not to Sacramento, which is a half-hour north of here, but to San Francisco. Then, we rode on a bus for two hours to Stockton.
On the airplane, I had a seat on the last row. I thought I had a window seat, and I would be able to look out and see the Rocky Mountains as we flew over. No, Row 32 on this particular aircraft does not have a window. So, for three and a half hours, I was crammed against the side of the airplane with two grown men I don’t know very well between me and the aisle. If you’re adding, that’s more than six hours of sardine duty for Daddy D. I saidto the man next to me, who was also next to me on the charter van, "This must be how the early astronauts felt, crammed inside a tin can in close quarters."
The trip to San Francisco was a little bit if a blessing. Most of the guys with whom I am traveling had never been there. Even though we didn’t stop, we drove right through downtown and across the Bay Bridge. We got to see the skyline, Candlestick Point, Bank One Ballpark (or, as most of them called it, “Barry Bonds Ballpark). It was great to see them get so excited. They were like teenagers, snapping pictures and pointing out landmarks to one another.
Conversation highlight: “Hey, man. Where’s Frisco?”
“You mean Fresno?”
“Nah. Frisco, man. Text message says when will we be in Frisco?”
“Dude, Frisco! San Francisco. You there now!”
“Oh.”
Amazing moment of the trip: We are fresh from the airplane and on the bus when the driver looks at us and says “I need directions.” Now, I’m thinking it’s a core competency of a charter bus driver to know how to arrive at his destination.
Another conversation highlight, moments after that question: “Bet the dude know where a Chop Suey restaurant is.” I’m traveling with a witty, politically incorrect group.
Here’s another one for you, as we crossed the Bay Bridge: “Y’all, look! It’s sea lions, for real! They be trippin’ out by that wave.”
I’ll be doggoned, there actually were sea lions out there. Whether or not they were trippin’, I couldn’t tell you.
“How come they ain’t no sign that say ‘Welcome to California?’ I want to get my pitcher made there.”
“Hey Jim, I need to leave two tickets for a friend of mine. I don’t know her name, Dog. I ain’t met her yet.”

This is the quality of conversation I was enjoying. Actually, it was a lot of fun.
I haven’t seen much of Stockton yet, except for my hotel room. However, I did notice that the minor league baseball team has a home game tonight. The Stockton Ports, AA for the Oakland A’s, will play Visalia. I think I’ve figured out how to spend my evening. The stadium looks relatively new, and has nice appointments. It’s adjacent to the downtown arena, 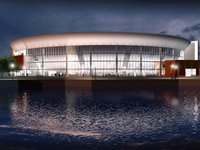 right on the banks of the river. It appears to be an outstanding sports and entertainment complex. I’ll be in the arena tomorrow night. There’s a balcony there just over the left-field fence of the baseball park. So, people in that section of the arena can simply turn their heads and catch the ball game. That’s pretty nice, right there. If I were in there, I just might be trippin’.
Stockton seems like a nice little city. I’m told the population is about 250,000. If we had come straight here, we might have a better perspective. But, we’re exhausted, and we did come through San Francisco. It’s unfair to compare, but imagine what fun we’d be having if we hadn’t gotten on that bus bound for the Chop Suey restaurant.

1) You flew from Dallas because the team probably saved thousands of dollars. It costs a fortune to fly from Shreveport. (and two fortunes to fly through Texarkana)

2) The less you see of Stockton, the better. Not the nicest place out there. You're better off spending time in San Francisco.