As a long-time television and radio sportscaster, I’m a little embarrassed that I somehow let the phenomenon that was “Boom Goes the Dynamite” slip past me. If you don’t know about it, I congratulate you. You’re in a tiny, exclusive club of which I am the president. Just Google the phrase and you’ll understand. I ran across a clip of the unfortunate moment in local TV history this week. Then, I sent an e-mail to a bunch of people I know who are still in the business asking if I am the last person on the planet to hear about this. The sheer volume of incredulity and wit which rained upon me was imposing.
“Dude, did you hear the North won the Civil War?”
“I’m sorry to report the Lindbergh baby has been found dead.”
“We landed on the moon! Yes!
“Did you know the world is not flat?”
Okay, I get the picture. The funny thing is, once I started reading about this, I remember it now. I remember the kid on the Letterman show, and I remember sportscasters dropping the catch phrase in at seemingly random times. It was a worldwide inside joke.
I think I must have blocked the whole thing out because it reminded me of perhaps the worst experience I had in local TV. In the late 70’s and early 80’s, I worked at KSLA. 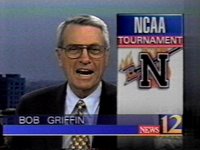 Bob Griffin did the weather and sports on weekends in those days. As Griffin’s #2 man, it fell upon me to anchor sports in his absence. I had no experience presenting the weather report. Griffin was gone one weekend, and I was in the office diligently preparing a sportscast. Tim Larson, who did the 10pm weather at the time, was scheduled to be on the air that night, as well. It was a springtime Saturday and Tim spent the first part of his day at a crawfish boil. What do you drink with spicy crawfish? Beer. Tim had too much. To his credit, I suppose, he realized he could not go on the air. Somehow, weather duty fell to me. As I recall, the dynamite went boom for me, too. Fortunately, the internet did not exist and as far as I know, no tape of the incident exists. It was a complete flameout, and I still have bad dreams about it.

Maybe the most embarrassing moment I had as a sportscaster actually happened much later in my career. The Dallas Cowboys planned to honor legendary wide receiver Bob Hayes by placing his name in Texas Stadium’s

ring of honor. I reported the story, and said “Hayes died earlier this year after a long battle with….” Here’s the thing: Hayes wasn’t dead. He was really sick, though. Just when you think nobody’s watching; announce on the air that a sports legend is no longer living. The next day, I ran a correction and an apology by saying, “I’m happy to report that I was wrong. Bob Hayes is very much alive and plans to be in Texas Stadium when his name is unveiled.
Deservedly, I will never live this down. I can prove it to you. Among the responses to my “Boom” e-mail was this:
Darrell, don’t listen to all the haters. Just remember, you were the first with the “’Bullet’ Bob Hayes is dead” story. No one can ever take that scoop away from you!
Everybody’s a comedian. I guess you can say they lowered the boom.

I just found your blog.. love it! You're the Shreveport Howard Kurtz! Only different.

Anyway, I'd like to see the clip from around 20 years ago where a local news anchor whose initials are A.P. thought they'd gone to commercial and launched straight into profanity-laced chatter with the at the desk. That fella really had a potty mouth! He didn't stay long with the tv news after that, but I see him on furniture store commercials sometimes.