It’s summer time. It’s not actually summer for two more weeks, but when the kids are not in school and the temperature is north of 90 degrees every day, it is summertime. This means we can catch up on our reading and take life a little slower, doesn’t it? Maybe for the enlightened, it does. For the average sloth-like American in the South, it means a change in TV viewing habits. So, let us make time now for Daddy D’s summertime TV confessions.
I only know two other people who watched Rock Star: INXS in the summer of 2005, and one of them is my wife. She watched because I always turned the show on. Now, I’m seeing promos on CBS for Rock Star: Supernova. I suspect I’ll watch.
Under immense pressure from Daddy D readers, I set my TiVo for “The Daily Show,” and I have to admit I’ve enjoyed it. I typically watch only the first two segments. I like the comic spin on the news, but I still haven’t learned to enjoy the interviews. Also, succumbing to reader influence, I have been grinding “The Office.” I even sat through the two-hour, four episode The Office mini-marathon on NBC last week. I have to admit I laughed a few times. I’m thinking the show is an acquired taste, like “Curb your Enthusiasm.” Once you get it, you get it.
I am proud to say, and you can check an earlier post on this topic to verify it, that I latched onto “the New Adventures of Old Christine” early. It was in the top ten last week, and 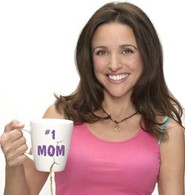 Julia Louis-Dreyfuss apparently has broken the so-called “Seinfeld Jinx.” That CBS Monday is pretty strong. We also enjoy “two and a Half Men” at our house.
We were in lockstep with America most of last TV season, but we seem to be taking a different path these days. I saved the last five episodes of “Lost” on the TiVo for a while. Then, it dawned on me that I hadn’t watched five straight new episodes, and that is a pretty clear indicator that I had lost interest. So, I deleted them all, and no one at the house seemed to care. We also have yet to return to Wysteria Lane. The Housewives may be desperate still, but I’m not desperate enough for something to do on Sunday nights to watch them.
I’m looking forward to this new NBC Series “Windfall.” They’ve been pushing it hard, and the promos have captured my attention. The pre-debut rankings have it “season pass” worthy.
There are some shows I’m saving for summer viewing. I’ve banked a half-dozen or so “House” episodes, and there are several “Law & Order SVU” shows still on the hard drive.
The whole family watched every episode of “American Idol,” so we’re not completely out of touch with America’s tastes. We did play out the string with “Alias,” too. One of these days, I’ll get “24” on DVD and see what all the fuss is about.
In the mean time, I’m sitting and anxiously awaiting the arrival of two things on my TV: College football and the new season of “Battlestar Galactica.” Until then, maybe I will try to catch up on my reading.

You're right about "The Office." I didn't like the first few episodes, perhaps mostly because I was still missing the British version of the show. But give it some time, and it will grow on you.

If you want some really wacky fun, TiVo the British House of Commons on CSPAN (airs on Sunday night). It is 30 minutes of drama worthy of a poorly written soap opera. Rumor has it the leader of the Liberal Democrats gets in some good digs on Tony Blair this week.

Sounds nerdy, I know, but once you see it, you'll be hooked.