Cheering, robust applause and a near swoon greeted George Hincapie in Shreveport last fall. He is a huge international sports celebrity, but many people never have heard of him. For those who follow his sport, having him in town was like seeing Michael Jordan, Derek Jeter or Tom Brady. The news that he was in the building was greeted with breathless anticipation. His arrival was reminiscent of that of an emerging rock star, complete with wide-eyed devotion in the eyes of some young female onlookers. Even middle-aged men who knew of him seemed giddy at his mere presence. The demand for his time or the ability to shake his hand was borderline oppressive. He was here, sitting on the brink of achieving superstar status, and he thrilled those assembled by patiently answering their questions. Then, he allowed those who had the desire and the ability to participate in the sport with him for part of an afternoon.

George Hincapie may be America’s best hope on a bicycle in France. Legendary cyclist Lance Armstrong retired after winning the Tour de France seven times in a row. Hincapie was on his team, and is given a tremendous amount of credit for helping Armstrong to victory. The pressure is starting to build as the Lance-free tour approaches, and the weight of the cycling world may rest for a time on Hincapie’s slender shoulders. 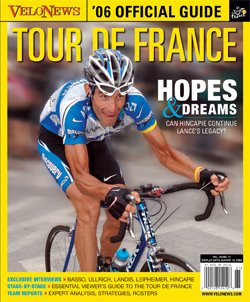 He is featured on the cover of a prominent pre-tour publication, and devoted cycling fans are counting on him. However, those shoulders might not be as strong as they should be. Earlier this year, he crashed during a race in France and suffered a grade three shoulder separation, among other less significant injuries. There was discussion of surgery, but an operation would have essentially eliminated any possibility of Hincapie contending for victory at the Tour de France.
When he was here, he explained that savvy cycling observers may perceive the notion of him as a candidate for the yellow jersey to be strange. He’s better known as a Classics rider. He’s been getting better in the mountains over the last few years, though, and he’s shown a knack for performing admirably in time trials. At six feet- three, his size may be a factor in the long, grueling test that is the Tour, but by all accounts he’s spent much of his rehabilitation time following his crash getting into the proper shape for cycling’s most noticed race.
Make no mistake: Hincapie is not the favorite to win the race. Some of his teammates may stand a better chance. With Armstrong out of the picture, the door is wide open for someone new to breeze under the Arc de Triomphe and raise his hands heavenward as the winner. The pressure is there, anyway. In previous years, Hincapie and the riders on his team would head to France knowing that they had three grueling weeks ahead of them trying to win the race with Armstrong. Now, they will be competing with one another while trying to contend, as if riding a bicycle through the Alps and the Pyrenees isn’t enough of a strain.
Having witnessed with amazement the reception our emerging hero received in Shreveport, it’s easy to imagine the weight of expectations pressing on him now. America’s best hope in cycling has been dwelling in the significant shadow of a living legend in his sport. If he finds his way into the sunlight wearing that yellow jersey, we may once and for all understand what all the cheering and swooning was about.