The Disturbing Disposition of Mike Sieve 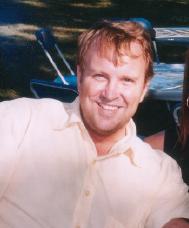 Mike Sieve, a morning new anchor at KEEL radio, has been arrested on a variety of charges stemming from an apparent attempt to meet teenagers at Shreveport’s Columbia Park. KTBS was the first local news agency to report the story, and the other major outlets followed in the subsequent days.
This is disappointing on many levels. Of course, it is disturbing that any adult would use the internet to try to arrange a meeting with teenagers, presumably for a sexual encounter. It’s all the more disturbing that a high-profile public figure like a news person on a popular radio station would do it. By the very definition of his profession, he’s supposed to be trustworthy. Personally, it’s unsettling for my family because we have known Mike for a long time and like him.
I’ve been to Mike’s home. My wife and I have spent many hours with him at various parties and public gatherings. I’ve worked with him at two radio stations. He’s always struck me as friendly, witty and talented. I did not have a glimmer of a notion that he might be the kind of guy who would try to “hook up” with teenagers. I have a fourteen year-old daughter. The idea that someone I know and like might be some kind of predator with her in his sites is chilling.
I really hope there’s a legitimate explanation for Mike’s activities. As far as we know, he’s been in jail since his arrest. His mug shot has been broadcast all over the area and is prominently displayed on several news websites. His reputation is in shambles. 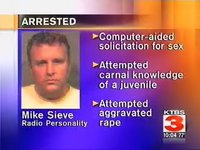 Having your picture shown on television with “Attempted Carnal Knowledge of a Juvenile” and “Attempted Aggravated Rape” displayed next to it will have that effect. In the event that this is all some huge misunderstanding, the rehabilitation of Mike Sieve’s name will be long and frustrating. If he is guilty of these nauseating activities, he deserves swift and severe punishment. He also deserves help. He is a witty and talented guy, but it looks as though something is terribly wrong.

From a completely different point of view, it's interesting to observe how the media handled this. Here's KTBS' Headline: Shreveport Radio Personality Arrested in Computer Sex Sting. KSLA: Radio Personality Jailed On Sex-Related Charges. The Times: Local radio personality arrested on six sex-related charges. Then, KTAL misses the mark: Shreveport Disc Jockey In Custody Following Caddo Sting. (I guess the folks at channel 6 don't actually listen to radio news. Maybe they don't know what a "disc jockey" is. Sieve certainly is not one.) So far, of course, the silence from KEEL has been deafening. To be fair, they havent had a live, local show since this news broke. I don't envy their position. The news director, John Lee, is Sieve's morning show partner. Lee's a veteran professional, a straight-shooter and a stickler for accuracy and ethics. I'm sure he will report this story with appropriate vigor.

John Lee and Daddy D in the mornings...I can see the billboards now!

One of the finer JJ and Ben shows as of late had Daddy D hosting with Mr. Sieve as a guest talking about all his cameo roles in recent movies. Did he play a police officer in one of them? Hmmm...

Apparently John Lee lost his vigor. I heard the news this Tuesday AM and he talked about six arrests, but never mentioned Sieve. How could he not when every media outlet in town has made a big deal of Sieve's arrest. It puts a dent in John's -- and KEEL's -- credibility, don't you think?